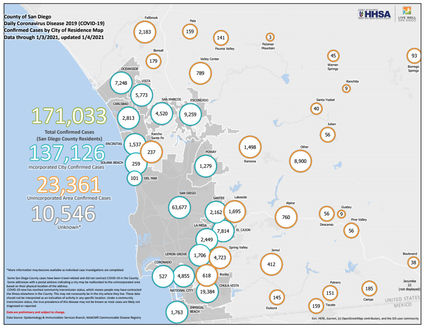 The county reported six deaths Monday, bringing the number of fatalities to 1,598. The three men and three women who died between Dec. 24 and Dec. 29 ranged in age from early 60s to late 80s. All had underlying medical conditions.

The county reported 47 new hospitalizations and nine new intensive care admissions Monday, bringing the cumulative number of patients hospitalized with COVID-19 during the pandemic to 6,031 and ICU patients to 1,237.

As of Sunday, 1,536 coronavirus patients were in the region's hospitals, with 376 were in ICUs. The county's ICU bed capacity was at 19%, according to county health officials, although with staffing issues, the reality is likely much lower.

One new community outbreak was reported Monday in a daycare/preschool setting. In the last seven days, there have been 45 confirmed community outbreaks, defined as three or more COVID-19 cases in a setting and in people of different households over the past 14 days.

The total number of cases of the new variant known as B.1.1.7, first detected in the United Kingdom, is four so far in San Diego County. The variant was first found in the U.S. last Tuesday in Colorado. The first San Diego case is in a man in his 30s with no history of travel, who first became symptomatic Dec. 27 and tested positive Dec. 29. He has been hospitalized and contact tracing was underway.

The additional three cases, reported by county health officials on Thursday, were found in two men in their 40s and one in his 50s. Contact tracing shows two men did not travel outside of the county while the third patient had yet to be fully interviewed. None of the men had any known interaction with each other or the other confirmed case.

The three newly confirmed variant cases were initially identified by helix during diagnostic testing, then confirmed by whole genome sequencing by Scripps Research. The four individuals who have tested positive for the B.1.1.7. strain live in La Mesa, Mission Beach, Otay Mesa and the Carmel Mountain/Rancho Bernardo area.

Students are expected to conduct daily symptom and exposure screenings and participate in free weekly testing. Students and employees are required to return samples within 72 hours by placing them in drop boxes next to the vending machines.