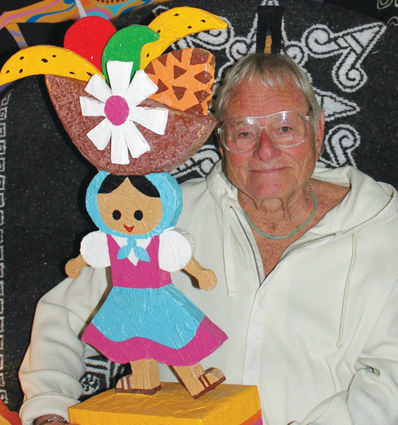 Rolly Crump cradles a paper mache figure, which is reminiscent of the figures created for "It's a Small World."

I can't imagine Disneyland without the influence of Roland "Rolly" Crump. This 90-year-old, who called Fallbrook home for many years and was named a Disney Legend, gave the park some of its most whimsical and magical touches while working as a Disney Imagineer. His ideas and the resulting creations were many, and his work appears throughout Disneyland: A shiny eye here and a whirring propeller there. Smiling figures, floating pianos and whimsical trash cans: They were all ideas born in the mind of this remarkable artist.

His vehicle license plate reads "Crumpy." It has become, to some, a description of a certain whimsical style of art – "Crump-like" or "Crumpy-like." When you first meet him, you are surprised at his humility and the more you learn about him you realize how extraordinary his humility really is.

"I've always felt that Disneyland was a gorgeous salad because of the ingredients," Crump said.

But what he didn't stress is that he was one of those responsible for the magical medley of "salad" ingredients.

In 1952, he began his work with Disney in the animation department – the fulfillment of a dream. His mother introduced him to a Disney employee, an interview followed and he was hired.

"Before the year was out, I was working on "Peter Pan," he said.

Throughout his nine years in animation, he also worked on "Lady and the Tramp," "Sleeping Beauty" and "101 Dalmatians."

Crump's segue to WED Enterprises, which is Walt Disney Imagineering, came about because of an innovative idea.

"I was making these crazy little propellers out of clips from pencils, and my room (at Disney) was filled with all of these propellers that were running off the air conditioning."

Someone then talked him into putting his inventive propellers on display in the Disney Library where an employee told Crump, "Walt came by and saw your exhibit – he seemed to really enjoy it."

"When I finally worked for Walt, I think it was the propellers that made him want to hire me," Crump said. "I think he liked my imagination.

"I don't have a favorite project I worked on at Disneyland – they were all my favorites. But I think the most impressive thing that I did was the clock and façade to Small World," he said.

When finishing the facade, Crump decided on a white and gold theme using gold leaf paint. The project took so much gold leaf paint that they dried up the U.S. supply and had to order some from Germany.

"It's a Small World" was created as one of the Disney attractions for the 1964 New York World's Fair, and Crump was part of that design team. The chess pieces that whirl around "England" were Crump's idea. He fashioned them, but they were brought into the ride with just a coating of white paint. He painted the designs while they were installing the ride. Crump, along with another Imagineer, Jack Ferges, designed 250 Small World "toys," which is what Disney called the non-audio-animatronic figures.

When the fair ride was disassembled and moved to Disneyland, it needed a lot of work to bring it back to life.

"Sections were ripped off – the 'flitter' was coming off," he said. "Flitter" is a term that Disney used to describe the glittery coating on some of the Small World toys. Disney employees, including Crump, cleaned and repaired the ride, making sure the flitter was just right, and even added one-third to the attraction to make it the pristine showpiece we enjoy today.

Crump's 120-foot "Tower of the Four Winds," led people to the Small World ride during the World's Fair, but this kinetic sculpture with Crump's whimsical propellers, didn't make it to Disneyland because of the extraordinary cost to move it.

In 1963, Disneyland opened the Enchanted Tiki Room, and Crump was one of those responsible for making the Tiki Room "Enchanted." Eighty percent of the tikis were his creations – from inception to the finished product. In the Disney Studios parking lot, armed with only a plastic fork from the studio cafeteria, he created various tikis from "plasticine" clay. After the tikis were completed, molds were made for fiberglass casting. The end result was fiberglass tikis which were hand-painted by Crump.

Some of the tikis took the form of monkey drummers, and when the attraction debuted, Crump said he looked at them and thought, "They have a dead look to them." So he fixed that problem with some Sparkletts water truck discs.

"I went up and screwed some Sparkletts things into the eyes so when the drummers beat the drum, the vibrations made the eyes sparkle – and they're still there," he said with a smile. Sparkling in true Disney fashion for over 50 years. 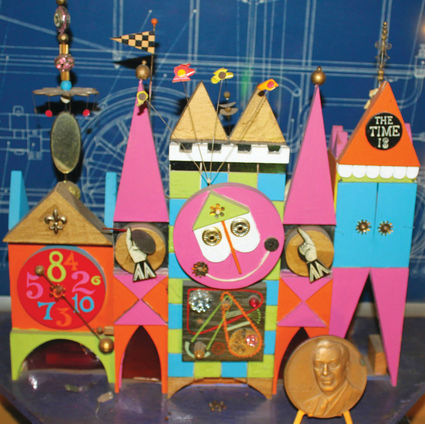 Original scale model of "It's a Small World" facade is part of Crump's collection.

Work on "The Haunted Mansion," which opened in 1969, took three years of his life. Crump's influence, and that of his work partner Yale Gracey, can be found in the séance room, ghostly wallpaper, ballroom organ, "stretching room," serenading graveyard busts and in several other shadowy corners of the ride.

Crump was made a Disney Legend in 2004. His first reaction was, "Why me? Walt said I was special, but I was just doing my job," he said humbly. In 2009, he was again honored, this time with a commemorative Disneyland window on Main Street USA above the China Closet shop. In 2012, Crump told his story to Jeff Heimbuch and the ensuing book – filled with tales and photographs – is entitled, "It's Kind of a Cute Story."

It's difficult not to catch the spirit – the enthusiasm – that Crump has for Disneyland and the work that he did to make it magical.

"It was very special when Walt was alive," he said, "I was fortunate to work for him."

His thoughts on his work as a Disney Imagineer? It was 40 years of heaven!