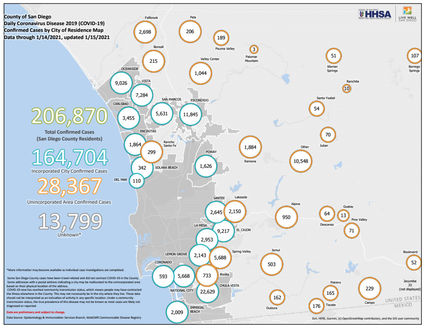 Friday's cases marked the 46th consecutive day with more than 1,000 new diagnoses. More than 3,000 daily infections have been reported 17 times, while the 4,000 case mark has been crossed three times.

For the second consecutive day, fewer than 2,000 cases were reported in the county, the first time that has happened since Dec. 28-29.

The county's cumulative case total rose to 206,870, and the numbers of deaths to 2,037. Of the 32 new deaths reported, 30 had underlying medical conditions and one did not. The medical history is pending for one person.

The deaths occurred between Jan. 5 and Thursday. Sixteen of the deaths were among people 80 years or older, seven were in their 70s, four in their 60s, one in their 50s, three in their 40s and one in their 30s. There were 16 men who died and 16 women.

Of the 30,851 tests reported Friday, 9% returned positive, dropping the 14-day rolling average from 13.6% on Thursday to 13.2%. The San Diego County Health & Human Services Agency and its partners have administered more than 3.1 million tests since the pandemic began.

A total of 31 staffed ICU beds remain in the county -- including both adult and pediatric beds. Only 260 ICU beds are occupied by patients without COVID-19.

Total hospitalizations from all causes increased to 4,912 from Thursday's 4,806. That number is 111 above the 80% threshold of occupied beds --

beyond which the county is reserving exclusively for COVID-19 patients.

The county has reported a 56% increase in the number of COVID-19 related hospitalizations in the past 30 days and a 42% increase in ICU admittance during that same time frame.

Seven new community outbreaks were confirmed on Friday -- two in business settings, two in health care settings, one in a hotel/resort/spa setting, one in a faith-based setting and one in a retail setting.

In the past seven days, 44 community outbreaks were confirmed, tied to 191 cases.

The state of California authorized immediate access to COVID-19 vaccines for all residents aged 65 and older this week, following new guidance from the federal government. However, local officials urged patience.

``We understand older San Diegans want to get vaccinated, but right now there is a very limited number of doses for people 65 and older,'' said Dr. Eric McDonald, the agency's medical director of epidemiology & immunization services.

``We're asking San Diegans to be patient, more vaccine is expected in the region soon.''

There are more than 620,000 people in San Diego County that belong in the Tier 1A vaccine distribution group. With the 65 and older group, health officials are looking at another 500,000, for well over 1 million people eligible for vaccines.

Both available vaccines are not effective without two doses.

``This means the start of hopefully the end of this COVID-19 crisis,'' said Donald Crawford, one of the first to get a vaccine at UCSD Health. ``I got the vaccine because hopefully it will help me and others and we can eventually get back to normal.''

UCSD reported Friday 245 of its students have tested positive for COVID-19 since the winter quarter began Jan. 4.

Of the 245 positive cases, 109 live at UCSD and the other 136 live off campus in the San Diego area, according to university data. Sixty-one

employees have also tested positive for the virus.

About 7,300 students live on campus, with just 2% of class sections held in person during the winter quarter.