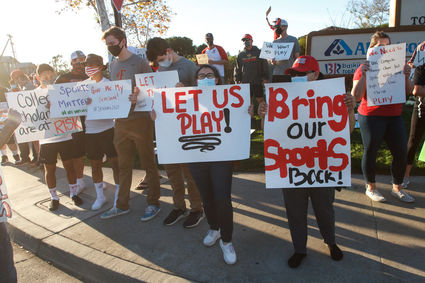 Players, coaches and parents gather at the intersection of Mission and Ammunition Roads at the Let Them Play rally to encourage support for resuming organized youth sports.

A few dozen athletes and parents gathered at the corner of Ammunition and Mission roads in the evening of Friday, Jan. 15 for a Let Them Play Rally, hoping to gather support for allowing youth and high school athletes to return to competition.

"All the kids want to play," Ryan Farrish said. "And we as parents support them. We think it's in their best interest to be able to play the sports that they're playing. A lot of these guys and girls, it's their last season. It's their last year as high school students and who knows what they're going to do when they go on to college or whatever life holds for them after that.

"We just want to be able to play like so many other states have been able to do. California just keeps pushing it off to the right and we just want to know what's going to happen one way or the other."

The "Let Them Play California" grassroots movement of coaches, players and parents hopes to convince Gov. Gavin Newsom and the California Department of Public Health to allow for a high school sports season in 2021.

All across the state on Friday, rallies were planned in unison to show that there is a growing need for sports to return for not only high school student athletes, but youth sports as well.

"I know my kids are motivated through sports," Justin Robinson said. "Their grades are better when they are playing sports, and they can act better at home as well. So, I'm trying to help get sports back on."

Robinson said he attended the rally to get people's attention.

"I hope people go and petition online to help bring back sports," he said. "The main thing is it's getting it out there. Our kiddos being trapped up inside is not helping them. It's not helping them socially. And then that affects them on the social level, but schools, well, they're almost a social place too, it helps you kind of fit in.

"We just want to bring back sports. Let these guys get out. Get out of my hair, run energy out."

The California Interscholastic Federation on Tuesday, Jan. 5 provided further information on guidelines that will provide a roadmap as to which teams could theoretically begin competitions on Jan. 25. Then on Wednesday, Jan. 13, CIF San Diego Section provided more information and moved swimming and diving up to Season 1 of the yearly schedule.

That means those athletes can begin practicing, along with cross country teams, on Feb. 1.

Other sports can begin practicing once their designated tier is within one tier of their approval to begin competition.

"As an example, field hockey would be able to begin their season once the Southern California region is off the 'Stay at Home' order yet continues in the Purple Tier," according to the communication from CIFSDS. "All of our sports in the Orange Tier, would be able to officially begin their season once the county of each member school's residence reaches the Red Tier." 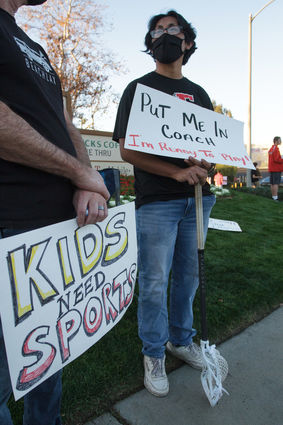 Players, coaches and parents gather at the intersection of Mission and Ammunition Roads at the Let Them Play rally to encourage support for resuming organized youth sports.

With coronavirus cases continuing to surge in San Diego County, deaths related to the virus and hospitalizations overwhelming area hospitals, it's doubtful the county would be moved into the Red Tier for at least a few weeks, if things improve.

Despite the update from CIFSDS, folks at the rally wanted things to move along more quickly.

"I am hoping that they will recognize that there are a lot more people that want this to happen," Kristy Platte Baker said. "We have been playing baseball since March or April (in Arizona) practicing only here in California. We have had one case within our families, including players and parents.

"So, we feel that it is safe. We want the economy opened back up so that we don't have to travel to Arizona to play sports. So, that's why we're here."