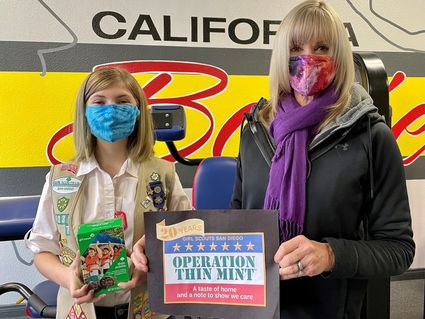 BONSALL – The Bonsall Woman's Club participated recently in Operation Thin Mint, a service-oriented program created by Girl Scout San Diego in 2002. The club has been supporting Operation Thin Mint for many years, and members of the Girl Scouts speak at each February general meeting.

The project provides deployed military members with "America's favorite cookies and countless notes of support" as a reminder that their families and community have not forgotten the sacrifices they are making. Since its inception, over 3 million boxes of cookies have been shipped. Initially, the project sent cookies to the deployed troops in the Middle East but it has since expanded to include troops serving around the world.

One of the club's members recently recalled selling her car to an Oceanside Marine who returned from deployment. During the conversation, the Marine recalled how much of a positive morale boost it was receiving Girl Scout Cookies "from a thoughtful person back home."

The community is invited to participate in this project. Make checks payable to Bonsall Woman's Club, P.O. Box 545, Bonsall, CA 92003. In the memo section, write "OTM." The program runs through the month of February. The cookies are $5 per box.

The Bonsall Woman's Club is a 501(c)(3) charity. For more information, visit http://bonsallwomansclub.org.