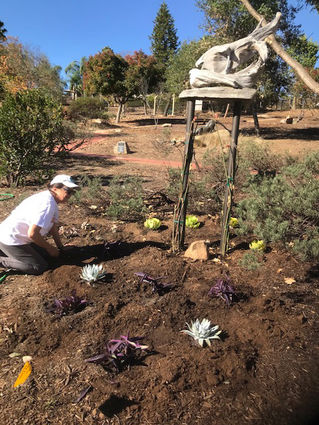 Cheryl Pizzo plants succulents around "Winged Companions," a driftwood sculpture of a pair of eagles.

FALLBROOK – The Wildlife Sculpture Garden in Fallbrook has been redesigned and replanted with the help of several local business owners, generous donors and volunteers in the community.

The effort was kicked off last summer under the direction of Beverly Tucker, a longtime Fallbrook Land Conservancy volunteer and supporter, who recognized the need to refresh the garden, which is located on a corner of the 1.5-acre Palomares House and Park on Stage Coach Lane. The unique garden is the site of seven wildlife-theme sculptures, which are featured on Fallbrook's Art in Public Places website.

In August, longtime volunteer Mark Lopez, Tucker and several volunteers began the task of weeding, raking and hauling away overgrown foliage and tree trimmings along the fences and pathways. Over the next few months, contributions from FLC supporters kick started major renovations, and two local businesses stepped up to help with renovation projects.

Landscape architect John Dahl donated his services to oversee the installation of an upgraded irrigation system in the garden. A & A Concrete, a local business owned and operated since 1978 by brothers Art and Arthur Baeza, donated four working days to paving the brick-lined path where honorary tiles are located and constructing a berm to prevent runoff from the gravel parking area. They also installed a new walkway in the upper pergola area. "We like doing community work," said Art about his contribution.

Another special volunteer was Ashley Schlumpberger, who became the 37th and first female Eagle Scout candidate to complete a project for the FLC by raising funds and supervising construction of a new pathway in the garden.

She was aided in her fundraising efforts by discounts on materials provided by Fallbrook Irrigation and Southwest Boulder. She also recruited up to 11 student volunteers to help with its installation throughout the month of November.

"The pathway that she created will allow greater connectivity through the Sculpture Garden, as well as provide a much needed connection point to the grounds from Calavo Road," according to Karla Standridge, FLC executive director. "The pathway will be particularly helpful during the FLC's annual fundraiser, Stagecoach Sunday, by creating better defined traffic flow and providing additional space for exhibitors to set up."

Several members of the community have also volunteered to create new plantings around seven different wildlife sculptures in the garden. They include Cheryl Pizzo, who planted succulents in the areas around the "Winged Companions" driftwood sculpture of a pair of eagles, and "The Beacon," a bronze hawk. Jim and Lisa Stowers, new FLC members, cleared and planted the area around the sculpture of a roadrunner entitled "Crowned Prince."

According to Tucker, December was a busy month that included moving dirt mounds and rocks, as well as spreading mulch. Succulents were donated by Dave Veltman and Renee Ingold. Veltman also spread annual rye to prevent dirt from washing away during heavy rain. 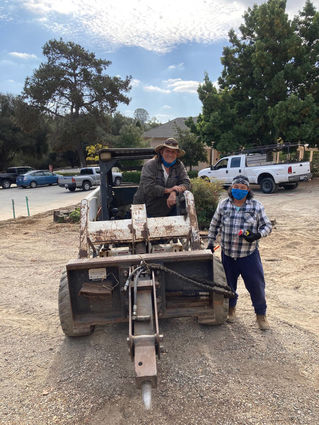 Art and Arthur Baeza of A & A Concrete paved the garden's brick-lined path, constructed a berm to prevent runoff, and installed a new walkway.

"We have come a long way, thanks to the generous contributions of time, money and materials. But there is much more to come," Tucker said.

For more information on the Wildlife Sculpture Garden, volunteer opportunities and other ways to contribute, visit https://fallbrooklandconservancy.org or call the FLC office at 760-728-0889.