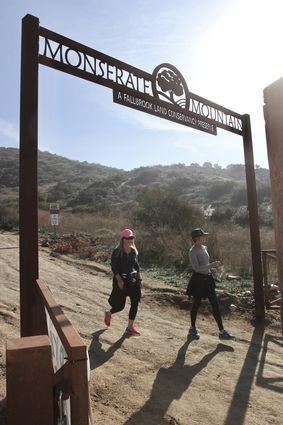 Hikers exit the Monserate Mountain trailhead during one of multiple Fallbrook Land Conservancy volunteer days, Feb. 11. The FLC is in the process of narrowing the beginning of the trail to allow native vegetation to grow and restore part of the landscape.

Slowly but surely, the Fallbrook Land Conservancy is putting the work into turning part of Monserate Mountain into a bit more hospitable of a place for the critters that call it home – and by extension making it a little more beautiful for the humans who visit it.

The land conservancy is in the process of giving the bottom portion of the trail through the preserve, located just east of Interstate 15 near the Horse Ranch Creek development, something of a "facelift," FLC board chair Susan Liebes said Feb. 11 at one of the nonprofit organization's volunteer events on the mountain.

The FLC, Liebes said, has upgraded the trail to prevent issues with runoff and has now begun adding more native plants and setting up a fence to keep hikers within the trail area, which will help keep nearby plants and wildlife safe.

The 350-acre Monserate Mountain Preserve was acquired by the FLC between 2000-2018, and functions as a "mitigation bank" where developers forced to offset environmental impacts of projects can buy "credits" that essentially pay to maintain the preserve.

"Developers can actually pay and purchase credits for this land here and basically pay to preserve this to offset what they've destroyed somewhere else," Liebes said.

The area of the trail that the FLC is now improving was among the last to be purchased, she said, which is why the improvements are taking place now.

"This first portion of the trail we didn't actually own up until about two years ago and so we couldn't really do anything permanent," Liebes said. "We just had an easement for people to hike through. And we were able to purchase that a couple of years ago so now we're trying to kind of give it a facelift."

Some of the initial improvements made include new signage and a kiosk. The FLC also added "rolling dips" to the trail to catch runoff coming down the hill.

"It catches the rainwater coming down and siphons it off of the trail, so it doesn't just keep washing out," Liebes said.

Those dips, though, had the side effect of encouraging hikers to walk to the side of the trail – hence the fencing project the FLC is now undertaking "to narrow the trail down to an 8 to 10 foot actual trail," she said.

"People go to the path of least resistance and they end up making it wider and wider and wider so we're going to kind of corral them into like a switchbacking trail that will go back and forth and be narrower," Liebes said, "and then the parts that we're fencing off we will be restoring with native plants so it will be back to nice habitat that will help with the erosion."

The designated trail area will help to keep humans away from wildlife habitats at the bottom of the mountain. "Our primary goal is habitat preservation," Liebes said. "The fact that we have a trail here is great, but that's sort of a side benefit – our main responsibility is to make as good a habitat as we can."

One reason why the Monserate Mountain Preserve is so important, she said, is because it's home to an endangered species called the California gnatcatcher, which has a range from Southern California to the tip of Baja California Sur but is threatened in the northern part of its range.

"The connectivity between the habitats is being reduced," FLC trails committee chair Ken Quigley, also present on Feb. 11, said, "and that's one of the big reasons that bird is now an endangered species by both the state and federal agencies, so preserving patches of habitat that hopefully connect with each other is the ultimate goal to hopefully get that species to recover."

Liebes said the FLC has just started to get back into the groove of having regular volunteer events to help with improvements to the Monserate Mountain Preserve – where volunteer events are held the first Saturday and second Thursday of each month – as well as other areas protected by the FLC, including the Los Jilgueros Preserve. When the pandemic first hit, there was a bit of a pause, she said, but now people are feeling a little more comfortable with helping.

"We feel like it's safe when everybody's masked and we're outside," Liebes said. "And we clean off the tools when we're done, and we kind of try to spread people out."

The FLC is especially reliant on volunteer events because it has few full-time employees, being a small non-profit.

The preserve has also seen a sizable increase in visitors since the start of the pandemic – in fact, visitors have nearly doubled, she said – making the improvements all the more necessary.

According to tallies from trail counters that the FLC was able to purchase from the Fallbrook Regional Healthcare District, Liebes said the Monserate Mountain Preserve went from an average of 115 visitors per day in 2019 to an average of 202 per day in 2020, and the number only continues to climb.

Information on volunteer events held by the FLC can be found at https://www.fallbrooklandconservancy.org/volunteer. 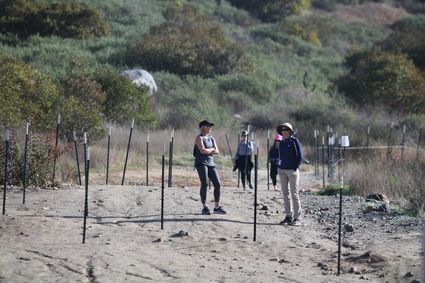 Metal rods line the path at the base of the Monserate Mountain trail where the Fallbrook Land Conservancy is placing fencing so native vegetation can grow without being disturbed.