Person killed in crash involving motorcycle on northbound I-15 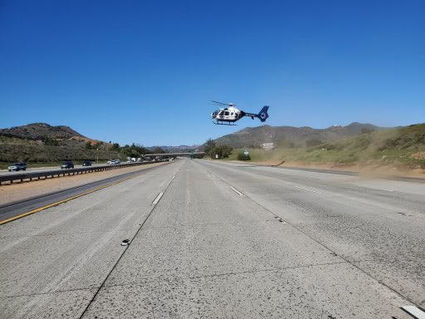 A paramedic helicopter lands on northbound I-15 to attempt to rescue a motorcyclist who was badly injured in a crash there Monday afternoon. Valley News/North County Fire courtesy photo

A paramedic helicopter had to land on Interstate 15 near Fallbrook Monday afternoon to rescue a motorcyclist who was badly hurt in a crash, resulting in the closure of the northbound side of the freeway for about 20 minutes.

The biker — whose identity was not immediately available — was taken to Palomar Medical Center in Escondido, but was pronounced dead in the emergency room, a North County Fire official said. An investigation of the crash was continuing to cause traffic delays on northbound I-15 near state Route 76 in the late afternoon.