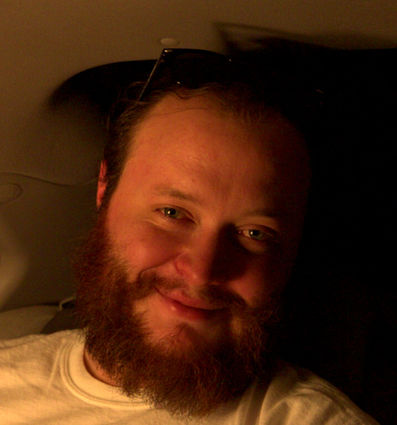 Michael was a self-taught game developer/programmer, digital and concept artist, computer programmer, EDM producer and home brewer, collaborating with his twin brother. He developed an Android cellphone game, "Fell: Escape from Cyrocon," that was pirated by someone in Germany. He worked many years on that game. He tried very hard to find a way to make a living.

Michael was kind, funny, extremely talented, smart and courageous. Chivalry was not dead with Michael. He and his twin brother have essential tremors that get worse with age. Sadly, essential tremors got in the way of "everything." He struggled to do anything that required the use of his hands. It causes severe anxiety and depression. It is a cruel condition. No medication worked to ease the tremors. People should always appreciate the use of steady hands. ET makes every day simple tasks hard or impossible.

March is Essential Tremor Awareness month. ET is a nerve disorder that causes shaking that you can't control in different parts and on different sides of your body. It often affects areas like your hands, arms, head, larynx, tongue and chin. While giving him a hug, you could feel his body trembling.

ET is not life-threatening unless it keeps someone from caring for themselves. Most people can live regular lives with this condition, although they may find it hard to do every day things like eating, dressing or writing. It's only when the tremors become severe that they actually cause disability. Physical labor exacerbates ET. Michael and his twin brother could not find work.

Doctors don't understand the true cause of essential tremor, but it's thought that the unusual electrical brain activity that causes it is processed through the thalamus. The thalamus is a structure deep in the brain that coordinates and controls muscle activity.

Genes cause ET in half of all people with the condition. Someone who has ET will have up to a 50% chance of passing down the responsible gene to their child, but the child may never have symptoms. Although ET is more common in older people – and symptoms become more serious with age – it is not a part of the natural aging process.

Essential tremor is the most common movement disorder, affecting up to 10 million people in the U.S. ET can happen at any age, but it most often appears during adolescence or in middle age between ages 40 and 50.

Michael is the youngest grandson of the well-known Judge Victor Wojcik, a U.S. Marine Corps veteran of the Korean War, and of U.S. Navy veteran of World War II, Korea and Vietnam Capt. Russell Mitchell, dermatologist. His grandmother, Dee Morrissey, was a nurse at Fallbrook Hospital from 1965-1985. He is survived by his mother and advocate Jill Mitchell Wojcik; father, Warren Rex Wojcik; brothers, Paul, Bryan (Angela, sister-in-law), Travis, Andrew and identical twin brother Sean; his cousin, Jana Anderson, her sons, Alex and Collin, and nephews Bret Wojcik and Gabriel Wojcik.

A Celebration of Life will be held at Christ The King Lutheran Church, 1620 S. Stagecoach Lane, in Fallbrook, Saturday, April 10, at 11 a.m. Pastor Mark Johnson will be officiating. Hope you can come.

I am sorry to hear this. My prayers go out to the family.