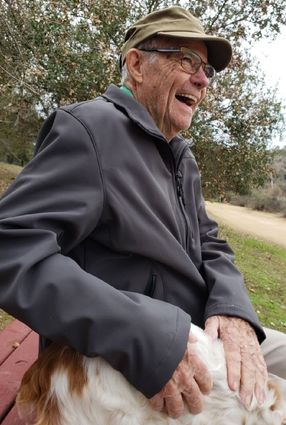 He studied forestry at Iowa State University, and after a summer as a fire lookout in Montana, he joined the Air Force. While in the Air Force, he became a photogrammetrist. He moved to Washington where he married Janet Kleefisch Oct. 3, 1953.

With the purchase of a convertible, the couple traded in their chilly life in the District of Columbia for a home in Southern California and 60-odd years of sunshine.

Bob was licensed as a professional engineer, and after several years working for American Aerial Survey, he opened his own business, Robert E. Stevens, & Assoc. in Covina.

He loved running his own business, and he especially loved spending time outdoors and allowing time in the schedule for an afternoon nap.

Bob loved a good joke and a cold beer. He loved walking through the forest and sharing the scientific name of each tree. He loved going to the casino and traveling the world, filling his house with treasures from his travels. But mostly he loved his children, his grandchildren and his dogs.

Bob was preceded in death by his wife, Jan. He is survived by his children, Tamara Homnick of Hickory Corners, Michigan; Ronald Stevens of Concord; Marta Baker of Solana Beach, and Rebecca Solander of Fallbrook, as well as 10 grandchildren and two great-grandchildren.

Donations can be made to the San Diego Zoo or Elizabeth Hospice.