By Diane A. Rhodes
Special to the Village News 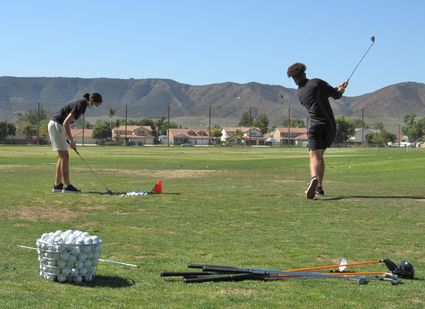 TEMECULA – As an organization designed to nurture well-rounded youth, Inter Tribal Sports combines athletics with wellness and cultural programs for Native youth in Southern California. It will host the opening day of its golf season April 3 at San Pasqual but is offering golf clinics through March at Murrieta Valley Golf Range to properly introduce the community to the new sport that ITS is offering.

The clinics are also designed to provide participants with the necessary tools and resources to allow them to have ultimate success during the season.

About a dozen golfers from age 14 to 18 were at the Feb. 27 clinic to work with some of the eight coaches that have signed up to be mentors throughout the season. Also on hand to work with the youth was Jenn Holt, resident golf pro at Murrieta

"I just want to see kids have the opportunity to try this sport," she said. ITS Program Manager Raymond Santiago made sure things were running smoothly for the youth who attended the first clinic and focused on three areas of concentration: chipping, driving and putting. He said ITS offers different sports throughout the year to give those with previous skills a way to practice and improve and those with no experience to learn about the game.

"It's so great to start something new and see people excited about it," he said. "We have kids who are full-on high school athletes to some who have never participated in a sport before."

Raised on the Viejas Indian Reservation, Santiago has played on the Viejas ITS team since he was 12 years old. He has worked with tribal communities for the past 10 years and has been with ITS for the past three years. The Temecula-based nonprofit is dedicated to unifying tribal youth and communities through structured athletic programs along with providing necessary resources and developing a strong foundation in culture, leadership and wellness.

While learning and perfecting skills in various sports, ITS program participants are reminded of the values stressed by the nonprofit: having fun with a positive attitude while learning about leadership and healthy lifestyles and experiencing self-improvement and personal growth.

The day-to-day operations of the organization has been overseen since 2018 by executive director Isaiah Thompson, who began working for ITS in 2017 as its program coordinator.

"When I was a child growing up on the San Pasqual Reservation, I participated in multiple ITS programs such as basketball, softball and all-star travel basketball," Thompson of San Diego said. "When I was younger, I participated in soccer, basketball, softball, cross country and track and field. Ultimately, cross country and track ended up being my calling as I won multiple CIF championships while attending Sherman Indian High School. Due to my athletic success in high school, I received an athletic scholarship to UC Irvine."

Thompson said knowing he is in a position to inspire future generations motivates him to be his best at all times.

"The ability to positively impact my own people has been the biggest satisfaction," he said. ITS staff work closely with the Board of Directors, coaches and tribal leaders to ensure that programs and activities are meeting the needs and expectations of the communities and that desired outcomes are being achieved.

Due to the pandemic shutting down so many sports, ITS sought community input in the form of a survey to help determine the needs of the people it serves.

"The ITS Board of Directors had a strategic planning meeting in 2020 to analyze the results and to determine what sports would have the most impact while being the safest for participants," Thompson said. "Golf is a completely new sport in our program. Traditionally, flag football would be during this time. A difficult decision was made to not offer flag football and offer golf instead in 2021. Golf is a great sport that allows individual competition and the ability for participants to keep a safe distance while competing."

He said during the COVID-19 pandemic, it was important for them to find ways to continue serving youth.

"The most difficult challenges have been the decrease in funding and the state restrictions that shut our program down," Thompson said. "In the state's eyes, we were deemed nonessential. We believe that our services are essential to the communities that we serve. ITS has very strong leadership at all levels and a great support system from our funders. The combination of both contributed to the organization's survival during the most challenging times."

Inter Tribal Sports is governed by a Board of Directors, comprised of a diverse group of individuals committed to youth interests in tribal communities. They are responsible for providing the overall direction of ITS.

Board president and Barona tribal member Brian Van Wanseele is one of about eight coaches working with ITS' inaugural golf season. He has been with the nonprofit since its infancy as a grass roots program in 2002 when a need was recognized for an organized, semi-competitive youth sports league. ITS earned nonprofit status in 2007 and Van Wanseele has served as president since 2008. 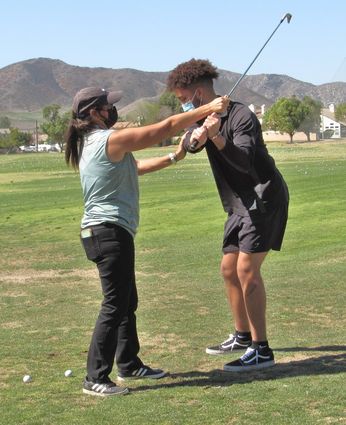 "I was not much of an athlete growing up, but I loved watching professional sports and went to college to become a PE teacher. I felt I could teach kids in a gentle way," he said. "What's cool about ITS is that it offers sports at a recreational level. Even if kids are not in shape or have never played a sport before, ITS is open and welcoming."

"We expect to have about 100 kids for the golf season, but that number continues to grow as the excitement builds throughout the communities," Thompson said. "The kids will play on tribal courses throughout our service area."