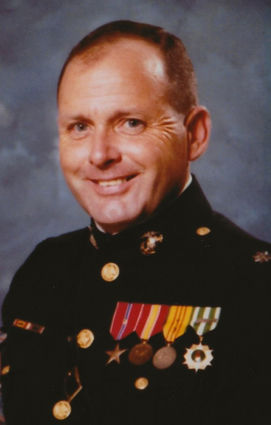 U.S. Marine Corps (Retired), 40-year resident of Fallbrook, died March 12, 2021 one month shy of his 85th birthday, with his beloved wife Beth by his side.

Dick served as a Marine Officer for 23 years, retiring in August 1981. A Vietnam veteran, Dick was awarded the Bronze Star Medal with Combat Distinguishing Device by the President of the United States for meritorious service in the Republic of Vietnam.

After his retirement, he worked as a senior system engineer and a member of the technical staff at Hughes Aircraft Company for another 22 years.

Dick is survived by his lovely wife, Beth, and his two sons, Rick and Ted; daughter-in-law Lisa; three grandchildren, Nina, Ric, Garett and great-granddaughter Giana, as well as many other beloved family members and friends.

A celebration of his life will be held at St. John's Episcopal Church in Fallbrook (11 a.m.) followed by interment in the Miramar National Cemetery (2 p.m.) on April 1, 2021.

Prior to these memorials, a visitation will be held at Berry-Bell & Hall Mortuary on March 31 from 5-8 p.m.