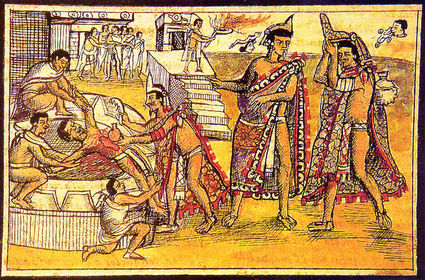 The nearly 900-page curriculum focuses on "historically marginalized peoples" – particularly racial minorities – and calls on students to study the "imperialism, settler colonialism and genocide, both cultural and physical" of those peoples.

The curriculum made national headlines early in March after Discovery Institute scholar Christopher Rufo, who researches "woke" ideology in public education, released details of a draft lesson plan about pre-Columbian American history. The lesson plan called for the "decolonization" of American society and would have students chant to the Aztec god of human sacrifice.

One of the "lesson resources" included in the draft curriculum would have teachers lead students in an "ethnic studies community chant" to various Aztec gods for the power to become "warriors" of social justice. The lesson plan linked a video showing what appeared to be students participating in a unity chant with similar language described.

The "chants, affirmations, and energizer can be used as energizers to bring the class together, build unity around ethnic studies principles and values and to reinvigorate the class following a lesson that may be emotionally taxing or even when student engagement may appear to be low," according to the draft curriculum.

Tezkatlipoka, one of the Aztec gods mentioned in the chant, is associated with cannibalism and human sacrifice according to the World History Encyclopedia. In one ritual practiced by the Aztecs, a priest would use obsidian blades to slice open the chests of sacrificial victims and offer their still-beating heart to Tezkatlipoka.

In a March 10 report about the curriculum published in City Journal, Rufo detailed the radical ideas espoused by R. Tolteka Cuauhtin, the original co-chair of the ethnic studies curriculum who worked on the pre-Columbian American history material.

Cuauhtin's book "Rethinking Ethnic Studies," which is referenced throughout the lesson plan, denounced the U.S. as a "Eurocentric, White supremacist, capitalist, patriarchal, heteropatriarchal and anthropocentric paradigm."

Cuauhtin also claimed White Christians are responsible for "coloniality, dehumanization and genocide" against Native Americans because European colonization of the Americas led to the replacement of indigenous religions with Christianity.

The curriculum materials call for "transformational resistance" against the "hegemonic Eurocentric neocolonial condition." One of the terms included in the lesson plan is "countergenocide."

"The chants have a clear implication: the displacement of the Christian God, which is said to be an extension of White supremacist oppression and the restoration of the indigenous gods to their rightful place in the social justice cosmology," Rufo said in City Journal.

The ethnic studies curriculum may have been approved by the state education board, but it is still only a recommendation for districts that want to incorporate ethnic studies and not yet a statewide requirement.

The curriculum's four-year journey to approval has faced numerous roadblocks other than objections to Aztec human sacrifice chants. Democratic California Gov. Gavin Newsom notably vetoed a bill in September 2020 that would have made ethnic studies mandatory for high school graduation over concerns about its balance and fairness, KCRA reported.

The first draft of the curriculum faced scrutiny from Jewish groups and lawmakers who objected to an assignment about Jews "gaining racial privilege," The Times of Israel reported. Some added the curriculum's lesson plans about Israel and mention of the Boycott, Divestment, Sanctions movement advanced forms of anti-Semitism.

But what really made California's ethnic studies curriculum so controversial is that it replaced traditional American ideas of individual merit and opportunity with critical race theory, a framework that interprets all social interactions through the lens of oppression, The Wall Street Journal editorial board argued in a March 16 op-ed.

Critics pointed out the curriculum is filled with left-wing academic jargon and includes a glossary containing buzzwords like "hxrstory" and "cisheteropatriarchy," according to The Los Angeles Times. Williamson Evers, a former Education Department assistant secretary, told Fox News that California's new curriculum furthers a "neo-racist ideology" that resembles indoctrination more than education.

"They're denying that the principles of America's founding – all men are created equal, they're endowed by their creator with certain inalienable rights and so forth – that these principles can, through time, bring about human rights for all," he said.

The statewide curriculum is the first of its kind in the country, and there are already renewed efforts to mandate it in California despite Newsom's veto last year. Its proponents have argued ethnic studies is necessary, especially given renewed focus on racial injustice after last year's George Floyd protests.

"Ethnic studies demands that we understand the forces that stand in the way of our shared humanity so that we can address them," board president Linda Darling-Hammond said last Thursday after nearly eight hours of presentations and discussion. "We need the more complete study of our history that ethnic studies provides and the attention to inequality that it stimulates."