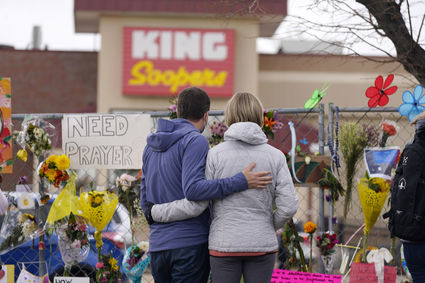 Mourners walk the temporary fence line outside the parking lot of a King Soopers grocery store, the site of a mass shooting in which 10 people died, Friday, March 26, in Boulder, Colorado.

Many leftists were quick to assume the perpetrator of the mass shooting Monday, March 22, in Boulder, Colorado, was a White man.

Police revealed Tuesday, March 23, that the alleged shooter was 21-year-old Ahmad Al Aliwi Alissa, leading some users to quickly issue corrections or delete their posts. Jumping to the conclusion that a mass shooter is a White male has become extremely common in the past few years, but the phenomenon raises an important question. Are most mass shooters White men?

While White perpetrators make up a majority of mass shooters in the last 40 years, the racial makeup of American mass shooters is roughly equivalent to that of the country as a whole.

Roughly 55% of mass shooters from 1982 to 2019 were White, while 17% were Black, 9% were Latino, 7% were Asian and 8% were of an unknown or other race, according to The Conversation using data from Mother Jones.

This proportion generally lines up with the racial makeup of the United States. Roughly 60% of the population is white, 13% is Black, 18% is Latino and 6% is Asian, according to the outlet.

The Rockefeller Institute of Government, a public policy research arm of the State University of New York, said there had been 340 mass shootings in the United States between 1966 and 2016. It defined mass shooting as "an incident of targeted violence carried out by one or more shooters at one or more public or populated locations. Multiple victims – both injuries and fatalities – are associated with the attack, and both the victims and location are chosen either at random or for their symbolic value."

It claimed that 53.9% of those crimes were carried out by White people.

Men represent the vast majority of mass shooters, with only five perpetrators being women since 1966, according to The Washington Post.

One of the problems associated with tallying exactly who perpetrated how many mass shootings is the fact that no specific government entity keeps track of mass shooting statistics, including race and gender, and that there is no universally agreed-upon definition of "mass shooting," Politifact said.

The FBI defined "mass murderer" as someone who "kills four or more people in a single incident (not including himself), typically in a single location" in the 1980s, according to the RAND Corporation. The bureau does not have a separate category for a mass shooting, however, and not every outlet that keeps track of mass shootings uses the FBI's mass murderer definition.

Mother Jones, which created a database to track mass shootings after the Aurora, Colorado, mass shooting in 2012, defines a mass shooting as an event in which a lone gunman took the lives of at least three people and their motive appeared to be to indiscriminately kill, according to Politifact.

The number of mass shootings taken into account when compiling data on them can vary wildly even in a single year because of the different definitions used by different organizations.

For example, Mother Jones recorded seven mass shootings in 2015 under the definition that a mass shooting constituted at least three fatalities, excluding the shooter, according to RAND. Under Mother Jones' definition, the shooting also had to take place in a public location and the motivation of the killer had to be indiscriminate, meaning that the motive couldn't be tied to gang violence, armed robbery or other reasons.

The Mass Shootings in America Database reported 65 mass shootings for 2015, RAND said. They defined a mass shooting as a shooting with at least three fatal or non-fatal injuries and took place in any location, public or private. The motivation of the shooter could also not be related to gang violence or organized crime.

Meanwhile, the Gun Violence Archive reported 332 mass shootings in 2015, but their criteria for what defines a mass shooting are different from Mother Jones,' according to RAND. By their definition, a mass shooting must have at least four fatal or non-fatal injuries, excluding the shooter, and any location and any motivation was taken into account.

Mass Shooting Tracker used the same criteria as the Gun Violence Archive, except that they included the shooter in the fatalities, and came up with 371 mass shootings for 2015, RAND said.

It would appear that just including the shooter to the requirement of four fatal or non-fatal injuries while keeping all other criteria the same added 39 mass shootings for a single year, showing how variable the numbers can be based solely on how an organization defines a mass shooting.