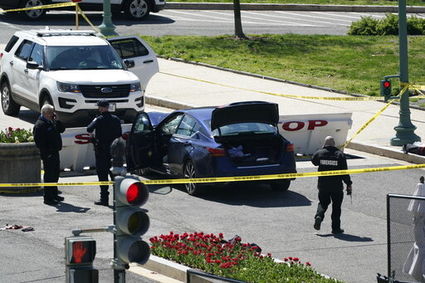 U.S. Capitol Police officers stand near a car that crashed into a barrier on Capitol Hill in Washington, Friday, April 2, 2021.

The suspect who rammed the car into two officers at a barricade outside the U.S. Capitol, killing one of them before he was shot to was identified as Noah Green, 25, from Indiana. Social media accounts belonging to him suggested he was a follower of the Nation of Islam and its leader, Louis Farrakhan, which is classified as a hate group.

WXIN in Indianapolis uncovered that Green had filed a name change petition in Marion County Court in Dec. 2020. The records indicate Green sought to change his name from Noah Ricardo Green to Noah Zaeem Muhammad. The hearing from that petition was scheduled for this Tuesday, but Green did not show up for that hearing and the court dismissed the matter and closed the case.

Officials with Christopher Newport University in Newport News Friday night confirmed Noah Green played football for the school and graduated from CNU with a degree in finance in 2019, according to Jim Hanchett, CNU chief communications officer.

Hanchett also said Green played football for the school for the fall 2017 and 2018 seasons. His bio on the 2018 football roster says he was a defensive back and that his hometown is Covington, Virginia. He went to Alleghany High School.

After Noah rammed into the two U.S. Capitol officers, killing one, video of the Friday afternoon attack showed the driver emerging from the crashed car with a knife in his hand and starting to run at the pair of officers, Capitol Police acting Chief Yogananda Pittman told reporters. Police shot the suspect, Noah Green, who died at a hospital.

Investigators are increasingly focused on Green's mental health as they work to identify any motive for the attack, said the official, who was not authorized to speak publicly about an ongoing investigation and spoke to The AP on condition of anonymity. The official said investigators had talked to Green's family, who spoke of his increasingly delusional thoughts.

In online posts since removed, Green described being under government thought control and said he was being watched. He described himself as a follower of the Nation of Islam and its founder, Louis Farrakhan, and spoke of going through a difficult time when he leaned on his faith. Some of the messages were captured by the group SITE, which tracks online activity.

Authorities installed a giant fence around the Capitol perimeter and for months restricted traffic along the roads closest to the building, but they had begun pulling back some of the emergency measures. And the most recent incident could delay the gradual reopening of the building's grounds to the public.

Police identified the slain officer as William "Billy" Evans, an 18-year veteran who was a member of the department's first responders unit.

House Speaker Nancy Pelosi hailed Evans as a "martyr for our democracy," while Senate Majority Leader Chuck Schumer said he was "heartbroken." Pelosi and Schumer both spoke Friday with members of Evans' family.

President Joe Biden said in a statement that he and his wife were heartbroken to learn of the attack and expressed condolences to Evans' family. He directed flags at the White House to be lowered to half-staff.

In 2013, officers with the Capitol Police and Secret Service fatally shot a woman inside her car after she led them on a high-speed chase that began outside the White House. Miriam Carey's family said she suffered from postpartum depression with psychosis but was not dangerous.

Friday's crash and shooting happened at a security checkpoint near the Capitol typically used by senators and staff on weekdays, though most were away from the building for the current recess. The attack occurred about 100 yards (meters) from the entrance of the building on the Senate side of the Capitol.

The area was locked down for hours Friday but has since reopened, and National Guard troops stood outside the building on Saturday.