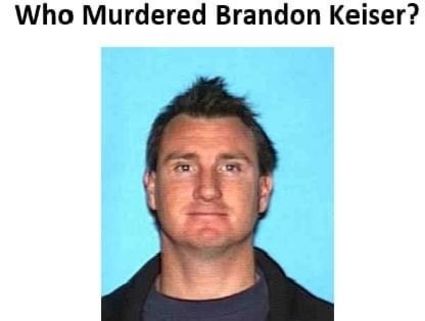 Brandon Keiser. Reward for Tips in the 2016 Oceanside Slaying.

SAN DIEGO - The U.S. Bureau of Alcohol, Tobacco, Firearms and Explosives announced today an increased reward for information leading to an arrest and conviction in the fatal shooting of an Oceanside man five years ago. The federal agency added $10,000 to an earlier offer of $1,000 posted by San Diego County Crime Stoppers for any tip that helps solve the mystery of who gunned down 35-year-old Brandon Keiser on March 22, 2016.

Shortly after 10 p.m. that day, patrol officers responding to reports of gunfire a few blocks east of Oceanside Transit Center found Keiser lying mortally wounded on a sidewalk in front of a home in the 400 block of South Freeman Street. The victim died at the scene.

Witnesses reported hearing an argument prior to the gunfire, leading detectives to believe that the slaying was not a random act, Oceanside Police Department spokesman Tom Bussey said. Investigators also suspect that the homicide may have been related to a shooting that wounded a man in San Marcos three weeks prior to Keiser's death, according to the ATF.

Anyone with information about the case is asked to call Crime Stoppers at 888-580-8477 or contact the agency online at sdcrimestoppers.org. Tipsters may remain anonymous and could be eligible for the $11,000 reward. Copyright 2021, City News Service, Inc.