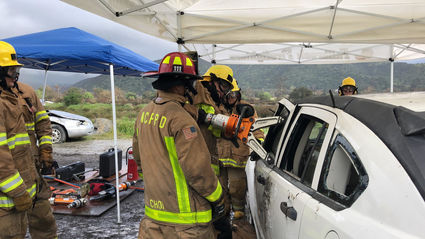 Firefighters practice using an extricatio tool to open up a car during training.

The North County Fire Protection District has been awarded a Neighborhood Reinvestment Program grant from the County of San Diego.

The San Diego County Board of Supervisors voted 5-0 April 6 to approve a $44,654 grant to the fire district which will be used to replace two aging extrication tool sets. The allocations also include $45,000 for the Pendleton Community Service Fund which will provide for a donation truck.

The NCFPD service area has a population of approximately 50,000, and automatic aid agreements send NCFPD apparatus into nearby communities.

"We have equipment that is aging, and it's very important that we upgrade," Abbott said.

The extrication equipment the fire district has is 14 years old. Replacement is recommended after 10 years. "It's past its replacement cycle," Abbott said.

The district has five fire stations. Station 4 in Pala Mesa has the highest volume of calls for traffic rescues. 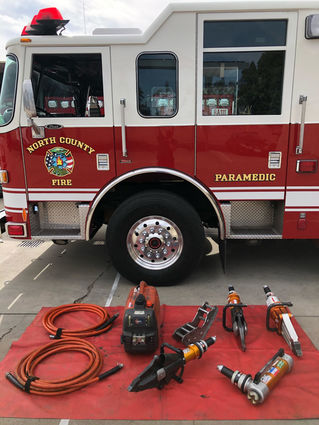 North County Fire's aging extrication tools are being replaced with a Neighborhood Reinvestment Program grant from the County of San Diego.

The Neighborhood Reinvestment Program is intended to provide grants to non-profit organizations for the furtherance of public purposes at the regional and community levels. In addition to non-profit organizations, county supervisors can also fund schools and fire departments, and supervisors can also use money from their budgets to supplement other county funding for specific county projects such as parks, roads, and libraries.

Each county supervisor recommends the allocation of his or her Neighborhood Reinvestment Program funds, although those allocations must be approved by a majority of the board. Supervisor Jim Desmond recommended the use of his District Five budget for the NCFPD and Pendleton Community Service Fund grants.

"We're just very thankful for the Board of Supervisors and Supervisor Desmond for their continued support," Abbott said.

The Pendleton Community Service Fund was founded in 2012 and assists new arrivals at the Marine Corps base. Qualifying families receive free furniture, housewares, and appliances.