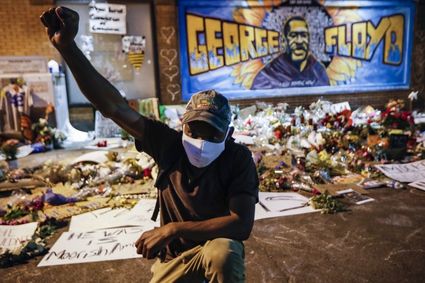 In this Monday, June 1, 2020 file photo, protesters gather at a memorial for George Floyd where he died outside Cup Foods on East 38th Street and Chicago Avenue in Minneapolis. Floyd died after being restrained by Minneapolis police officers on May 25. The deaths of Floyd and other black men at the hands of Minneapolis police have exacerbated the corrosive relationship between people of color and a criminal justice system they feel is stacked against them.

MINNEAPOLIS (AP) - The jury reached a verdict Tuesday at the murder trial of former Officer Derek Chauvin in the death of George Floyd, the Black man who was pinned to the pavement with a knee on his neck in a case that set off a furious reexamination of racism and policing in the U.S.

The verdict, arrived at after about 10 hours of deliberations over two days, was to be read late in the afternoon in a city on edge against the possibility of more unrest like that that erupted last spring.

The courthouse was ringed with concrete barriers and razor wire, and thousands of National Guard troo...