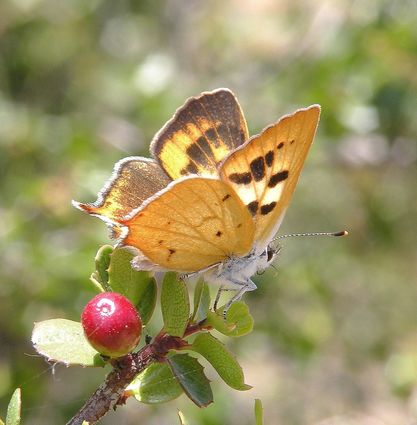 Hermes copper butterfly is found primarily in San Diego County, California, with a few records of the species documented in Baja California, Mexico. It inhabits coastal sage scrub and southern mixed chaparral and lays its eggs on its larval host plant, spiny redberry.

SAN DIEGO - The Center for Biological Diversity filed a lawsuit today against the U.S. Fish and Wildlife Service for allegedly failing to protect 19 plant and animal species, including a butterfly currently found only in San Diego County and Baja California.

The lawsuit filed in federal court in Washington, D.C., seeks to protect the species under the Endangered Species Act.

The Center for Biological Diversity alleges there have consistently been delays in protecting imperiled species, with it taking 12 years on average

for species to receive protection during the Endangered Species...