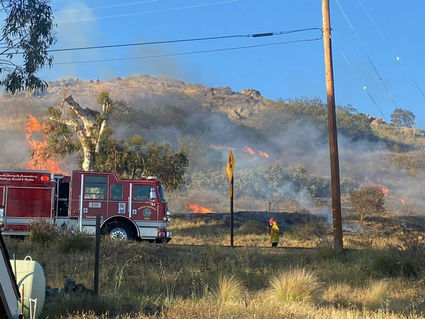 A fast-burning vegetation fire Monday evening, April 19, burned a half-acre before being extinguished by multiple response teams, including a drop by an air tanker from Cal Fire in Ramona.

The fire was reported at 6 p.m. at East Mission Road and Valentine Lane, burning up the bank on the north side of the road, which was closed for hours. The fire threatened homes up the hill but there were no injuries or structures damaged.

Station 1 of North County Fire was first to respond but units from San Marcos and Camp Pendleton stations also assisted.

The fire was started by hot catalytic converter fragments from a vehicle's exhaust along the road, said Capt. John Choi of the North County Fire Protection District.

"It shows that we're going to have a busy fire season," Choi said. "We're fortunate that Cal Fire just began a higher level of staffing in preparation for the summer."