Signs of recovery as California adds jobs for 2nd month 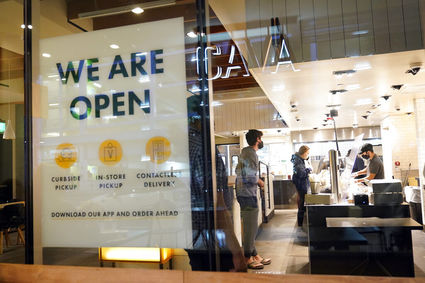 This Tuesday, March 16, 2021, file photo shows a sign advertising a restaurant opening, in Santa Monica, Calif. California has added 119.600 new jobs in March. It's the second straight month of growth following a year of enormous losses and inconsistent gains during the pandemic.

New unemployment claims, both for traditional employees and independent contractors, are at their lowest levels since the pandemic began more than a year ago.

Restaurants and hotels, which have weathered heavy losses during a year of stay-at-home orders, accounted for more than half of the 260,600 jobs added in the state since February. Experts said Friday that's a sign the world's fifth-largest economy is exiting the pandemic-induced recession and entering what is likely to be a prolonged recovery.

"This healthy job number heralds the beginning of the end of the pandemic," said Sung Won Sohn, a professor of finance and economics at Loyola Marymount University.

In San Diego County, the leisure and hospitality industry accounted for more than half of all new jobs in March. That included the 30 new hires at Blue Bridge Hospitality, which operates nine restaurants in the area. Owner David Spatafore said he has had to increase wages as much as 25% to attract employees, and he still needs to hire 40 more people.

"I think it's going to be like the roaring '20s when it comes to this summer," he said. "This is going to be one for the record books. We've got to be ready."

But if historic patterns hold, it will likely be years before California recovers the jobs lost during the pandemic. Prior to March 2020, California was riding a record wave of 10 consecutive years of job growth following the Great Recession. But the state lost 2.7 million jobs in March and April 2020 after Gov. Gavin Newsom issued the nation's first statewide stay-at-home order because of the coronavirus.

California has regained less than half of those jobs since then in a slow recovery interrupted by a surge of cases in December and January that prompted more layoffs. Even with gains in February and March, California's 8.3% unemployment rate is tied for third-highest in the country. More than 1.5 million Californians who are looking for work still did not have jobs.

The difference now is more than 9.7 million people have been fully vaccinated against COVID-19, with an average of 387,325 doses administered each day. Stadiums, theme parks and concert venues are welcoming back fans, resulting in more rehiring.

On average, just 1.7% of Californians tested for the virus actually have it, among the lowest rates in the nation. If the trend continues, Newsom said he will lift all virus restrictions on June 15.

"This state is ready to come back, come roaring back," Newsom said Thursday during a news conference to announce all adults are now eligible to receive a COVID-19 vaccine.

The recovery is far from a sure thing. Just this week, California and other states stopped giving out doses of the Johnson & Johnson COVID-19 vaccine after federal regulators investigated reports of blood clots in six people. It's also unknown how the vaccines will hold up against variants of the virus.

But for now, signs point to the state continuing to add new jobs in the months ahead. The numbers for March were based on surveys the week of March 12. That was before relief payments and other aid for small businesses arrived in the bank accounts of California residents and employers.

"Today's numbers, to me, are the first strong signs of the recovery," said Michael Bernick, a former director of the California Employment Development Department who is now an attorney with the Duane Morris law firm.

How those small businesses fare over the next few months will play heavily in the state's recovery. Newsom and the California Legislature have approved just over $2 billion in grants for small businesses. But they have yet to pass a law allowing small businesses to deduct expenses from forgivable federal loans from their state tax returns, which would collectively save them $2.3 billion over the next five years.

California is one of the few states that hasn't done this yet.

"Sacramento Democrats and Washington Democrats failed small business owners in our state," U.S. House Republican Leader Kevin McCarthy and other California Republicans wrote in a letter to Newsom this week.

Toni Atkins, the president pro tempore of the California Senate, said Wednesday the Democratic-controlled state Legislature "have not let go of the strong desire to bring that forward."

"We probably will be able to take action on this as early as next week," she said.

This story has been updated to correct that more than 9.7 million Californians have been vaccinated, not 30% of the population.