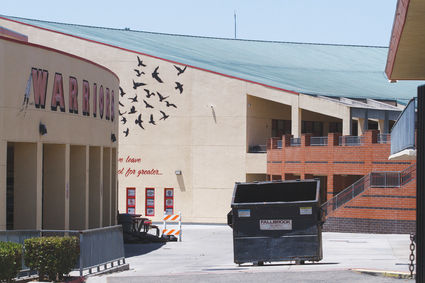 Students have recently returned to Fallbrook Union High School for two half days a week, after doing online learning since last spring. Some parents are not happy with that schedule, wanting classes to be five days a week.

With the announcement last week that a group of parents desired to recall Diane Summers, board president of the Fallbrook Union High School District, four parents agreed to a conference call to explain why they are initiating this action.

In last week's article about the recall in the April 15 Village News, the parents stated they "came to ensure that anyone elected to the board of trustees followed the bylaws and fulfilled their obligation to the students."

The phone interviews were to clarify their concerns. Nora Maier and Heidi Roderick filed the Notice of Intention to Circulate Recall Petition. They were joined by Hank Donigan and Victoria McSheehy for the interview.

Basically, the parents don't feel the school board is responsive to parents and they aren't getting answers to why Fallbrook High School students are attending in-person classes just two half-days a week. On top of that, they are concerned the same format may extend to the 2021-2022 school year.

This comes at a time when most districts in the county – and in the state – are beginning to open for in-school classes. Students in the Fallbrook Union Elementary School District have returned to in-class learning, but not the high school.

"The last board meeting (April 12) was the straw that broke the camel's back," Roderick said. "That's when they decided to ignore the parents."

Recall petitions may not be available for a couple of weeks. Once the legal notice is published, Reclaim Fallbrook Schools has 10 days to file the petition of recall with the Registrar of Voters office. Then they can begin gathering signatures. The group has a web page with details: reclaimfbschools.com.

The school board meets next on April 26. All the meetings are conducted through Zoom video. Superintendent Ilsa Garza-Gonzalez said she could not comment about the recall, but she did send information addressing some of the concerns of parents.

Asked why Summers was the target of the petition, Roderick said that may be just the beginning. "We'll start with the president, but we really wanted to recall all of them!" she said.

"We would like to systematically remove the others," added McSheehy.

"My impression is that the board seems to be serving the interests of the union more than of students," Donigan said. "The teachers want a pay raise or bonus, and the board votes as a 5-0 block to approve what they want. No one on the board brings up discussion or objections."

Maier added, "Everything just gets 'rubber stamped.' There's no discussion by the new board members. With the previous board, there was more discussion. It results in a high level of frustration."

"The president of the board should know Robert's Rules of Order, but instead she's disrespectful," Maier said.

Vice president Eddie Jones and Oscar Caralampino were elected in 2020. Summers, Lita Tabish and Elana Sterling were elected in 2018. Each term is for four years. Roderick noted that the two new board members were un-opposed on the ballet.

Maier also said she felt two of the three members elected in 2018 have a conflict of interest in pension decisions by the board.

The interview group hinted there may also be a lawsuit effort, and that parent groups from other school districts are connecting and are supportive. They added that Reclaim California, the group behind the recall effort with Gov. Gavin Newsom, has offered to help train volunteers in signature gathering and supply binders for the forms.

"There is frustration because there is no explanation of why they are only allowing two days of school, 3.5 hours each," Roderick said. Two groups of students meet on campus for classes on Monday and Tuesday or Wednesday and Thursday mornings, and the rest of the week is for online studies.

Maier said that the board hasn't said they were bringing students back in the fall.

McSheehy noted that a recent survey by the district asked parents for their preference for students, but it didn't include the option for five days in class. She said parents haven't been told the results.

Maier said that the district also surveyed parents in August about their preferred options, and those, too, haven't been released – despite parents asking district officials.

Maier also mentioned that every family is different and that some students may thrive on distance learning or a hybrid format, but that many prefer the in-class option.

Donigan said he didn't think the home was the proper place for academics. Students are more attentive in the classroom, he said.

"It's difficult to sit in front of a screen to learn," said McSheehy, whose son is a sophomore at FUHS. "Learning online is much more difficult. All we want is what's best for our students."

She became interested in the recall effort shortly after discovering there were other parents concerned about the high school students missing their normal school experience. McSheehy said she and has about 200 members following her concerns through social media.

"We need to take back our community," McSheehy said. "Nobody knows what's up for the fall. We need to fight for our students."

"We need to work together for the betterment of students," Maier said. "The board is not willing to join with the community. We should be working together."

"I'm very concerned, said Donigan, a retired Marine colonel who moved to Fallbrook in 2003 while still in active duty. His youngest son is a freshman at FUHS.

"I heard about this from other parents about a month ago and decided to become involved," he said. "It seems the board is unresponsive to parents."

"You have to realize the impact distance learning is having on the students, especially in a rural community," Donigan said. "The harm is immense. High school is more than the classroom – it's the social development with participating in the band, dances, and other activities. They need to establish it live at least four days a week."

Roderick agreed, saying how important the social aspects are. "Two days isn't enough. They need more than that."

"As a parent I begged to put the re-opening on the agenda, Maier added. "It's disturbing that the board won't even let us ask questions – or tell us about next year."

"I don't understand why parents were recently sent an email with an article, 'How to help your student with distance learning' when the year is practically over," Roderick said. "Is it for next year?"

Maier said the governor is taking the state off the tier program on June 15, so there's no reason not to have schools meet on a traditional schedule.

NOTE: Diane Summers, board president of the Fallbrook Union High School District, was reached by phone on April 16 but declined to comment, saying her attorney said she should respond in writing. Her response is on the Opinion page, A-X..com