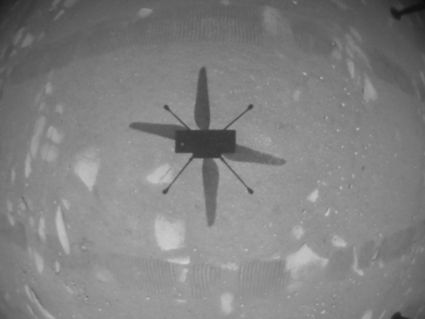 NASA's first black and white photo from Ingenuity appears, showing the helicopter's shadow as it hovered above the surface of Mars.

NASA's experimental helicopter Ingenuity rose into the thin air above the dusty red surface of Mars Monday, April 19, achieving the first powered flight by an aircraft on another planet.

The triumph was hailed as a Wright brothers moment. The mini 4-pound helicopter even carried a bit of wing fabric from the Wright Flyer that made similar history at Kitty Hawk, North Carolina, in 1903.

It was a brief hop – just 39 seconds and 10 feet – but accomplished all the major milestones.

"Goosebumps. It looks just the way we had tested," project manager MiMi Aung said as she watched the flight v...