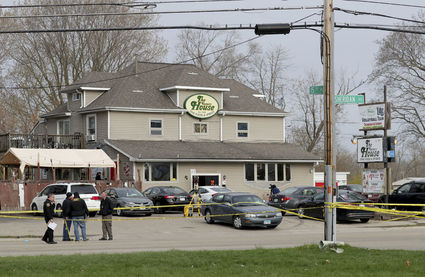 Officials investigate the scene of a deadly shooting at Somers House Tavern in Kenosha, Wisconsin, Sunday, April 18, 2021. Several people were killed and two were seriously wounded in a shooting at the busy tavern in southeastern Wisconsin early Sunday, sheriff's officials said.

KENOSHA, Wis. – The man in custody in connection with a shooting at a southeastern Wisconsin tavern that left three men dead and three others injured was involved in a fight at the bar before coming back with a handgun and opening fire, authorities said Monday, April 19.

Rakayo Alandis Vinson, 24, appeared in court on suspicion of first-degree intentional homicide for the early Sunday shooting at the Somers House Tavern in the village of Somers. Kenosha County Court Commissioner Loren Keating set bond for Vinson at $4 million cash, citing the seriousness of the charges, Vinson's record o...