UPDATE: Arrest made in deadly three-vehicle fiery crash on Interstate 15 in Temecula

A box truck failed to stop in time before hitting a Prius, which engulfed both of the vehicles in flames and the Prius driver died before he could escape.

TEMECULA - A motorist was killed and another driver was injured yesterday in a fiery three-vehicle collision on Interstate 15 in Temecula.

Kevin May, 47, of Fontana was at the wheel of a box truck directly behind a Prius and failed to slow down, causing his vehicle's ``front end to

The crash happened about 12:30 p.m. on southbound I-15 between Overland Drive and Rancho California Road, according to the California Highway

traffic, and the victim, driving a 2015 Toyota Prius, braked behind the big big.

``The box truck and Toyota became engulfed in flames,'' he said. The driver of the Prius, who was not immediately identified, was

unable to escape the inferno and perished in the sedan, according to the CHP spokesman.

May bailed out of his truck, suffering moderate injuries, and was taken to Inland Valley Regional Medical Center in Wildomar. The big rig driver

was not hurt, and the semi did not burn, Lassig said. 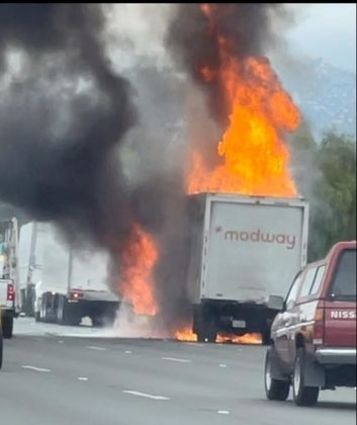 A box truck and Prius are engulfed in flames.

Lassig said the investigation is ongoing and an arrest may be imminent. CHP officers shut down three of four southbound lanes to facilitate

first responders and clear the wreckage. A SigAlert was issued at 12:55 p.m. for both sides of I-15 due to major traffic congestion stemming from the crash.

By 5 p.m., two lanes were available, and two lanes remained closed on the southbound side, according to the CHP.