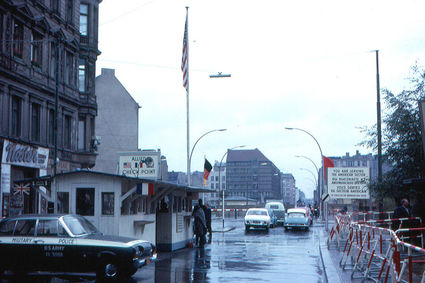 This is a view of Checkpoint Charlie in 1963, from the American sector, four years before Ron and Judy Ritter passed through there on a tour of East and West Germany.

The year was 1967, a year when the U.S. and the Union of Soviet Socialist

Republics remained locked in the Cold War. As Ron and Judy Ritter walked the

grounds of Wartburg Castle – in East Germany – they observed another man

and woman, likewise on a stroll.

"They were a distinguished couple," Ron Ritter recalled. "When they reached an area with a view to the west they just stopped, staring into the distance. They just

stood there, whispering I think, so still, just looking across the border."

"It was puzzling, so I had to ask what they were doing," Ritter said. "They replied,