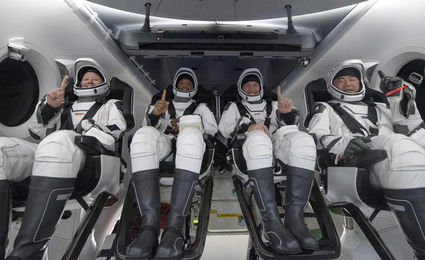 NASA astronauts Shannon Walker, left, Victor Glover, Mike Hopkins, and Japan Aerospace Exploration Agency (JAXA) astronaut Soichi Noguchi are seen inside the SpaceX Crew Dragon Resilience spacecraft onboard the SpaceX GO Navigator recovery ship shortly after having landed in the Gulf of Mexico off the coast of Panama City, Florida, May 2, 2021. NASA's SpaceX Crew-1 mission was the first crew rotation flight of the SpaceX Crew Dragon spacecraft and Falcon 9 rocket with astronauts to the International Space Station as part of the agency's Commercial Crew Program.

The Dragon capsule parachuted into the Gulf of Mexico off the coast of Panama City, Florida, just before 3 a.m., ending the second astronaut flight for Elon Musk's company.

It was an express trip home, lasting just 6 1/2 hours.

The astronauts, three American and one Japanese, flew back in the same capsule - named Resilience - in which they launched from NASA's Kennedy Space Center in November.