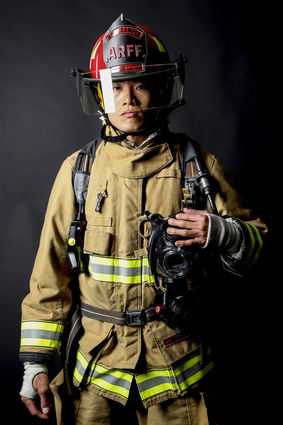 The Marine Corps strives to recognize those Marines who have gone above and beyond what's normally expected of them.

"Sgt. Lin received the firefighter of the year award due to his dedication to improving himself and the Marines around him," said Staff Sgt. Brian Tabares, another station captain with ARFF. "Over the last year he has volunteered his time to instruct over 500 classroom hours, resulting in over 12,000 man-hours of training. He served as an evaluator for 15 firefighter certification performance tests, resulting in 12 Marines possessing mission critical certifications. Most importantly, he was part of a wildland firefighting team who aggressively fought and resupplied over 60,000 gallons for a fire aboard Camp Pendleton endangering the DeLuz area housing and child development center."

Lin serves as a station captain, a billet which is typically reserved for staff noncommissioned officers.

"Sgt. Lin is a station captain, so pretty much during any incident he's the one giving the orders," said Cpl. Dylan Treadwell, a driver operator with ARFF. "He's the guy commanding the incident, making sure that the firefighters are where they need to be, all the resources are allocated, all the assignments are getting done, while also working hand-in-hand to make sure everyone is safe."

According to Tabares and Treadwell, Lin goes above and beyond for the Marines above and below him. He is a firm yet compassionate leader who encourages each Marine he interacts with, while providing one-on-one mentorship and guidance. Lin's examples of compassion and leadership ensure his Marines have the skills they need to respond to emergencies on the flight line and save the lives of people in need.