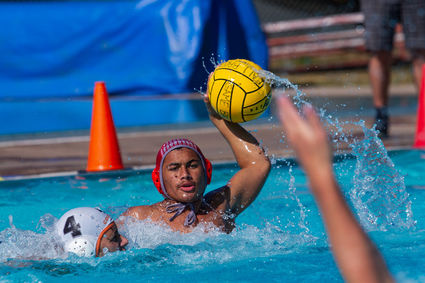 Fallbrook Warrior Tegan Cannon looks to make a pass to a teammate against Escondido during the varsity boys water polo game, May 7.

The official score of Fallbrook's April 29 home win against Rancho Buena Vista was 5-0 since that is the official score of a forfeited game. RBV only had six players and had to forfeit, but Fallbrook coach Bill Richardson and RBV coach Kim Hockett arranged to have a full game with Fallbrook loaning a handful of players to the Longhorns. The unofficial game ended with a 22-6 score with some of the Fallbrook players on loan scoring some of the RBV goals. Mission Hills traveled to t...