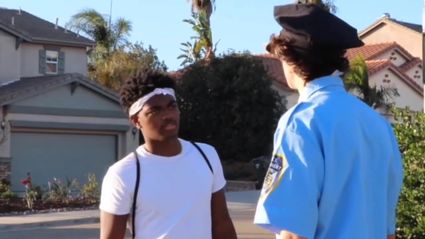 Senior Delvon Williams portrays a teenager who finds himself in a confrontation with senior Tavian Sorensen, portraying a police officer, in senior Adam Rodarte's film "In These Streets," which took the Grand Jury Prize for Narrative Filmmaking at the 2021 Montclair Film Festival.

This year, Fallbrook High School film students submitted multiple movies to the 2021 Montclair Film Festival in New Jersey, and four of those films won in the "Emerging Filmmakers" category.

The Montclair Film Festival is a large festival on the East Coast that normally attracts more than 15,000 attendees, all eager to watch the films from up-and-coming filmmakers from all over the world. The films that are shown during the festival are handpicked by a group of judges. Notable advisory board members include J.J. Abrams, Stephen Colbert, Abigail Disney, Emma Freud, Laura Linney and Jon Ste...