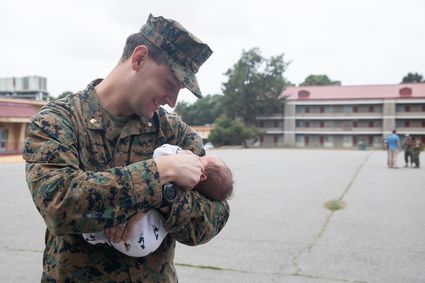 U.S. Marine Corps Maj. Scott Vigus, forward air controller with Battalion Landing Team 1/4, 15th Marine Expeditionary Unit, holds his newborn son for the first time during a homecoming event at Marine Corps Base Camp Pendleton, California, May 20, 2021. The 15th MEU returned from a seven-month deployment to the U.S. 3rd, 5th, 6th, and 7th Fleet areas of operation, serving as a crisis-response force for combatant commanders in the Africa, Central and Indo-Pacific commands.

Marines with the 15th Marine Expeditionary Unit embarked aboard the ships of the ready group and arrived Friday to disembark at Camp Pendleton, the US. Navy said.

"These ships were deployed during an unprecedented pandemic and demonstrated

the ability of the Navy and Marine Corps team to fight through to do the mission. I am so incredibly proud of each and every one of them and their families for their service and their sacrifice.''

The team departed Nov. 10 after completing sea exercises in October. The group conducted more than 10,000 hours of flight operations, 6,800 launch and recoveries, and traveled more than 135,000 nautical miles of open ocean and restricted waters, the Navy said.