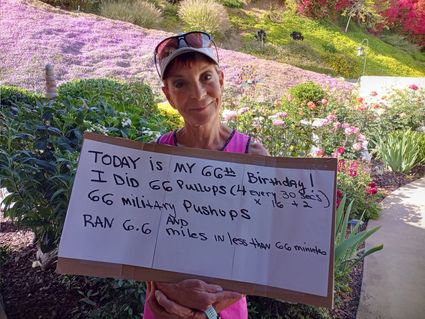 Sue Slater challenges herself to complete 66 full pull ups, 66 military pushups, and run 6.6 miles in less than 66 minutes for her 66th birthday.

Last year, Sue Slater and her husband, Steven Schindler, relocated to Fallbrook from Glendale, California, and Slater is now working as a part time fitness instructor at California Bodies.

Slater said that she has been passionate about fitness for over 40 years.

"When I was younger, I wasn't in good physical condition," she said. "Then when I was 23, I took a fitness class at Truman college, and the class was taught by a marathon runner. That class sparked my interest."

She began running marathons at the age of 25, and she has completed more than 50 marathons since that time. Now, Slate...