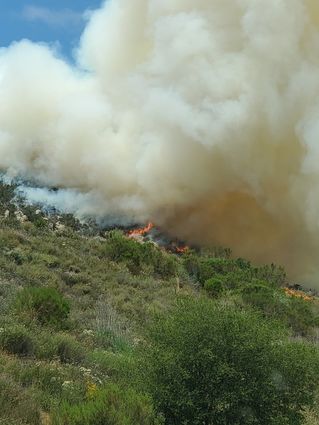 The brush fire near Deer Springs was 80% contained Saturday, May 22, after shutting down the southbound Interstate 15 freeway, officials said.

The fire started around 11:30 a.m. near I-15 and Deer Springs Road, the California Highway Patrol reported.

There was an early report that the fire was holding at 25 acres from Southern California Air Operations, but Cal Fire San Diego spokesman Thomas Shoots said the correct acreage burned was seven acres, not 25.

Fire investigators found debris from a faulty catalytic converter in the area, which is suspected to be the cause of the fire, Shoots sai...