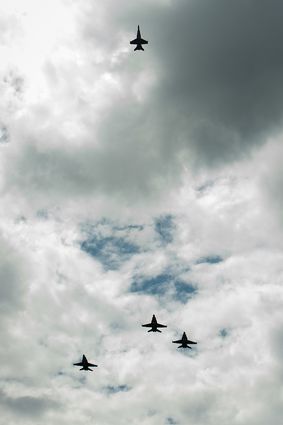 Palm Springs Air Museum has planned a special unveiling and dedication of four new Tuskegee Airmen statues and an aerial salute called the "Missing Man'' formation will take place. This photo is from the Neil_Armstrong_family_memorial_service_(201208310007HQ)

PALM SPRINGS  - The Palm Springs Air Museum will honor the sacrifices of the nation's fallen soldiers this Memorial Day weekend with an air fair that will include 3,000 red and white carnations dropped from aircraft.

The annual Flower Drop and Air Fair will get underway Sunday and Monday at 10 a.m. each day, with the traditional flower drop set for around 2 p.m on both days. The event will also feature flight exhibitions, live music, and food.

Aircraft are also set to drop roses in honor of 27 Gold Star Families who reside in the Coachella Valley. A Gold Star Family displays a Gold Star Service Flag for service members who died while serving in the Armed Forces.

For the past 20 years, military members -- both past and present -- have been honored in Palm Springs on Memorial Day with the release of 2,000 white carnations signifying veterans of historical wars dating back to the Civil War, and 1,000 red carnations for soldiers engaged in current conflicts.

The air fair is typically held over one day, but organizers opted for a two-day event due to COVID-19 attendance restrictions.

Flight enthusiasts were urged to book a ride in the museum's Douglas C-47 Skytrain, T-28 Trojan or P-51 Mustang while rides were still available.

Unspecified local governmental dignitaries will also be in attendance, the museum said.

Tickets range from $17.50 to $19.50 per person. Children under 12 are free with a paid adult admission. All tickets must be purchased in advance at http://www.palmspringsairmuseum.org.