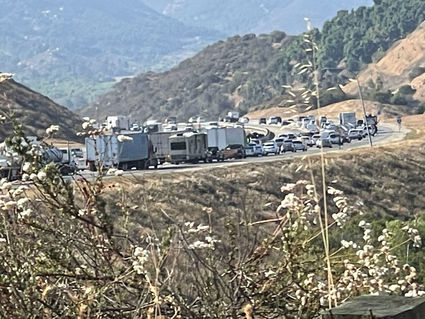 Traffic backs up on Southbound 15 at Mission Road after a wrong way crash early in the morning of June 4.

FALLBROOK – On Jan. 4, at approximately 4:14 a.m., a two-car collision occurred on I-15 southbound, south of Mission Road. A 28-year-old male from Cardiff was driving a 2014 Audi. A 46-year-old male from Chula Vista was driving a 2013 Toyota. For reasons that are still under investigation, the driver of the Audi was traveling southbound in the northbound lanes and collided head-on with the Toyota.

As a result of the head-on collision, the Toyota became fully engulfed. The driver of the Toyota was able to escape the vehicle.

Alcohol is suspected to be a factor in this traffic collision. The driver of the Audi, identified as James Conner McFarland, was taken into custody shortly after the collision and booked on Felony charges.

FALLBROOK – A driver was arrested on suspicion of DUI and another driver suffered severe injuries this morning following a wrong-way, head-on crash on Interstate 15 in Fallbrook, according to a media report.

Dispatchers received reports shortly before 4:10 a.m. that a vehicle was heading southbound on northbound Interstate 15 near Fallbrook, according to the California Highway Patrol.

A short time later, the wrong-way vehicle crashed head-on into another vehicle on northbound I-15 near Mission Road, the CHP reported.

The northbound vehicle caught fire after the crash, but several good Samaritans were able to pull the driver out of the burning vehicle, 10News reported.

The victim was taken to a hospital for treatment of life-threatening injuries, while the wrong-way driver was arrested on suspicion of DUI, according to the news station.

No details about the two drivers or their vehicles were immediately available.

A SigAlert was issued around 5:15 a.m., shutting down the left two lanes on northbound I-15 near Mission Road.