FUHSD honors outstanding seniors as the May Students of the Month 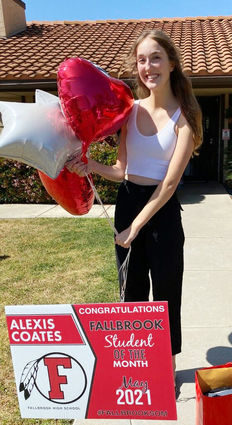 The Student of the Month Committee selects nominated students for this honor by criteria that include excellence in academics, school service and activities, community service, leadership and citizenship.

Nominated by her youth director, Chace Steeves, Coates has successfully balanced an academic load that has included AP English Literature and four years of American Sign Language with several leadership positions. A natural leader, she has participated in Associated Student Body leadership for two years, served as a performance dance team captain and as a leader with Fallbrook Christian Athletes.

Pastor Steeves said that Coates is a "dedicated and driven young lady with a heart to serve" and "is a positive influence in the lives of others."

She volunteers at North Coast Church and serves as a Sunday School teacher. Coates loves the "community of people" at FHS, and she expresses her "big thanks to all the staff." Coates is looking forward to completing her general studies the next couple years at MiraCosta Community College and then hopes to achieve a bachelor's degree in Film and TV at Chapman College.

Gates, nominated by his JROTC instructor, Lt. Col. William Wade, is an exceptional role model to his peers. Because he excels in math and science, he has enjoyed tutoring high school students throughout the year and looks forward to working as a tutor with the high school's AVID program next year.

Having served on both Fallbrook High School's Varsity Academic Team this year as well as the JROTC Academic Team, he made it through the on-line testing with his JROTC team to earn a placement at the national competition in Washington, D.C. this July. As the only graduating senior who will be going with three

underclassmen, he will be serving as mentor and coach of his team of four at the competition.

During the school year, he has also voluntarily assisted the USMC Deployment Readiness Coordinator in putting together care packages for units that are returning from overseas. Wade commended Gates in stating that he is "an outstanding role model that other students should emulate with the great mix of commitment to family, academic excellence, and service to his community and country."

When he is not helping others with their academics or leading troops as Staff Sergeant, Gates relaxes by "playing video games and hanging out with friends."

Gates will study at Palomar College and then earn a degree at a four-year university in math education. He hopes to emulate two of his fine math teachers

Having earned a 4.0 grade point average, Reyes, nominated by Berg, is well- respected as "The Teacher" in his math and AVID classes. Berg said that he goes into break-out groups, asks everyone in the group who needs help and will not move on until everyone "gets it." Berg also shared an example of how kind-hearted Reyes is in that he calls students who miss class to make sure they are okay.

Reyes has also helped his peers in the past with his participation in the tutoring program, "Gear Up." He served as vice president of the school's California Scholarship Federation the past year, and has been an active member of Club Futoro and Folklorique Dance, in order to stay connected with his heritage.

Reyes is grateful for the opportunity to work at Jersey Mike's. When time permits, he also enjoys "playing soccer and sleeping, too." What he appreciates most about Fallbrook High School is its "comfortable sense of community." Reyes said he feels his calling is to serve as a nurse and is very happy to have been accepted in the Nursing Program at California State University, San Marcos.

He feels the suffering that many have experienced from the coronavirus has made him even more determined to be a first responder. Reyes, who cares so much about the plight of others, said, "I can't wait to step in and do my part."

Emerie "Emma" Vergara is described by science teacher Marin Pinnell as being "confident, caring and motivated, wanting to make the world a better place." A student-athlete and leader, she has participated in track and field and water polo while at FHS. A student leader of FCA, she said she is grateful for the relationships she has cultivated with her fellow athletes.

During her high school years, Vergara made time to do community service at the Angel Shop, St. Peter's Thrift Shop, Boys and Girls Club at Potter Jr. High School, and Live Oak Elementary School, where she enjoyed helping her former elementary school teacher.

What she appreciates most at FHS are her classes and teachers. When time permits, Vergara loves to write; she attributes her continued desire to write poetry to her 4th grade teacher at Live Oak Elementary School, Mr. Wood, who always encouraged her. Inspired by her biology teacher, Mrs. Scamback, and her English teachers, she hopes to teach either biology or English in the future.

After she achieves her Associate of Arts degree at Palomar Community College, Vergara plans to complete her Bachelor of Arts degree in education at a four-year university. Because she works two jobs – at Albertson's and at a daycare center – she has learned to manage her time well. 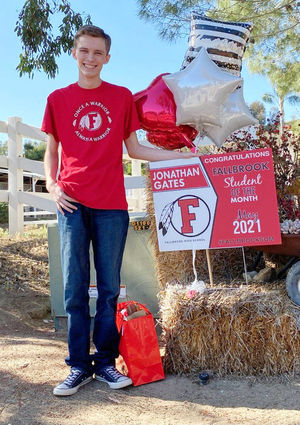 Jonathan Gates earns the May Student of the Month title after being nominated by JROTC instructor Lt. Col. William Wade.

They are grateful to the administrators and staff of Fallbrook Union High School District for their ongoing support and to the businesses and non-profit organizations who have continued to support the program with generous donations and gift bags. Beginning in October 2021, the Committee is excited to resume the in-person Student of the Month Breakfast recognitions.