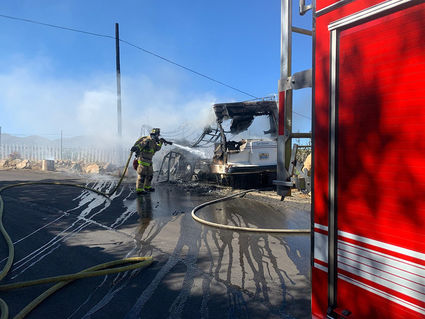 A firefighter douses an RV along Ranger Road in Fallbrook after the vehicle caught fire, earlier in the day Sunday, June 13.

When firefighters arrived they found the RV fully engulfed, he said, adding that there was a "little bit of extension into the vegetation."

"The column of smoke could be seen in the east area of Fallbrook," Choi said. "It was a pretty defined column."

The fire was underneath a powerline so SDG&E had to be notified and has arrived on scene to do a survey of its equipment.