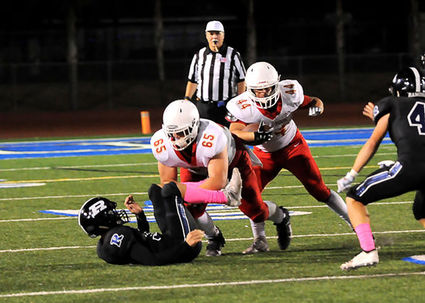 Brady Hoff holds off the defense making way for his teammate to gain ground for the Fallbrook High School Warriors in 2019.

"I'm completely honored to have won that award," Hoff said. "It definitely is an honor. It definitely has been a long four years, and the amount of work I put in has paid off."

"Well deserved," said Fallbrook head football coach Troy Everhart. "I'm just glad to see his hard work get rewarded. He was a tremendous leader on and off the field for us."

Although Hoff's father was in seventh grade when he began playing organized football, Hoff did not have such an early start. "I didn't play football until my sophomore year, and that year I made varsity," he said.

He spent eighth grade with the Temecula-based Menace Baseball Club. Hoff was a first baseman and pitcher for Fallbrook High School and also played those positions while in Fallbrook Youth Baseball.

The focus on baseball delayed the start of his football activity. "I've played baseball my whole life, and they always had tournaments," Hoff said.

Hoff thought about playing football as a ninth-grader but opted against it. "I just wanted to focus on baseball and try to make the varsity," he said.

During his ninth-grade year, Hoff was also a center on Fallbrook High School's freshman basketball team. He played organized basketball prior to high school but not after his freshman year.

Marco Arias is a Fallbrook High School history teacher as well as the Warriors' cross country and track and field head coach. Arias taught Hoff's World History class when Hoff was in ninth grade. "He's the one who got me to play football," Hoff said.

Hoff achieved his goal of making the Warriors' baseball varsity as a ninth-grader. "He showed great potential as a freshman," said Fallbrook baseball coach Pat Walker.

Reaching the CIF semifinals with his brother is Hoff's favorite baseball memory. His older brother, Collin, graduated from Fallbrook High School in 2018. Hoff has a younger brother, Camden, who was in eighth grade during the 2020-21 academic year.

When the Warriors were playing football, Hoff was an offensive lineman and defensive lineman. The Valley League football coaches gave him honorable mention all-league status as a sophomore.

"He's aggressive on the bases," Walker said. "He helped us on the mound."

Everhart took over as Fallbrook's head football coach in 2019, and during Hoff's junior year he was a first-team Valley League selection for his gridiron activity.

Hoff was a team captain as a senior. "He was almost a unanimous selection. He was an overwhelming selection," Everhart said.

"My favorite football memory would have to be the Escondido game from this year," Hoff said. "That game was special."

Fallbrook recovered an onside kick with 1:36 remaining and gained a first down three plays later. On that play Hoff incurred a high ankle sprain which kept him out of the Warriors' final two football games.

"He was still incredibly active in practice," Everhart said. "He was just as engaged."

The injury kept Hoff off the baseball diamond for the subsequent eight weeks.

"He showed up to basically every practice," Walker said.

"He led by example there," Walker said. "He just wanted to be a part of it still."

Hoff returned to baseball play May 28. "I'm thankful he was able to play those last three games," Walker said.

The May 28 game at Valley Center was a 5-3 Fallbrook win. Hoff had a single in four at-bats, scored a run, drove in a teammate, and stole two bases. Valley Center prevailed in the 6-2 contest May 31 although Hoff had a double and a walk in three plate appearances while scoring once and driving in the other run.

Hoff had a batting average exceeding .300 in each of his three final seasons, and he was hitting .400 when the 2020 season was called.

"He is going to be missed for sure," Walker said.

Three league baseball games were not enough to give Hoff all-league honors, and the coronavirus shutdown occurred prior to the start of league play in 2020 so no baseball players earned all-league recognition that year. 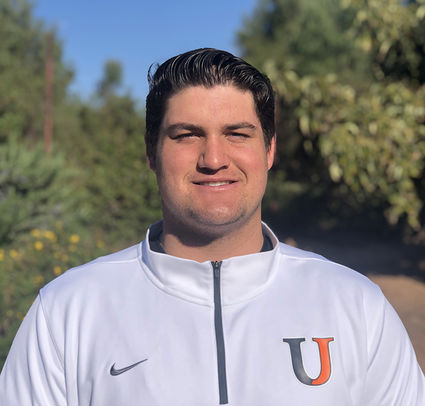 Brady Hoff will be attending University of Jamestown in the fall and he will continue playing football during college.

His all-league football honor as a senior would not be Hoff's final recognition. The team's postseason awards banquet included presenting him with the Heart of the Warrior Award.

The National Football Foundation's San Diego chapter honored Hoff with a Scholar Leader-Athlete Award. "It was great to win that one, too," he said.

"It was a high honor," Hoff said. "That one was very unexpected."

Hoff will continue his football career at the University of Jamestown, which is in Jamestown, North Dakota, and is affiliated with the National Association of Intercollegiate Athletics.

The Warriors did not reach this year's CIF baseball playoffs, so his graduation ended Hoff's Fallbrook High School activities. "It's a great school. It was four years of fun, and I wouldn't have had it any other way," he said.