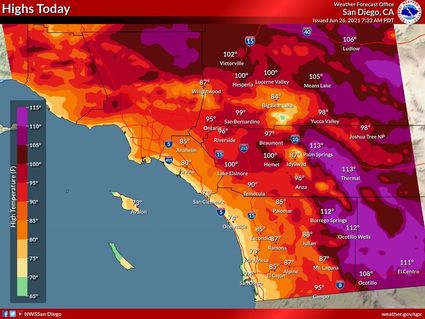 SAN DIEGO - A period of cooling that made for a fairly temperate start to summer in the San Diego area this week will give way to intensifying heat over the next several days, according to meteorologists.

weekend, bringing local temperatures 5 to 10 degrees above normal to Southern California, according to the National Weather Service.

Due to the potential for dangerously hot conditions, an NWS excessive-heat watch will be in effect for the local deserts from Sunday morning through

Low daytime humidity levels in the arid eastern reaches of the county are expected to fall to around 10 percent through the weekend, forecasters

said. Those conditions, combined with dry, gusty winds, will result in elevated wildfire hazards in the deserts and on the eastern slopes of the mountains.

For the early and middle part of next week, monsoonal moisture may begin to spread into the region, a development that could bring a chance of

thunderstorms, mainly in the mountains and deserts and mostly during the afternoon and early-evening hours, according to the weather service.

The potential for dry lightning strikes will be greater initially in the heat wave, when atmospheric moisture will be relatively limited. The potential for rainfall may increase later in the week, meteorologists said.