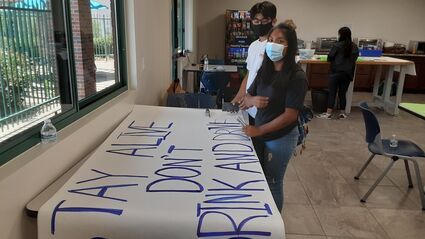 Fallbrook Youth Advocacy Coalition members Yareli Albino and Jackie Albino work on a sign for a July 2 DUI prevention rally the group plans to hold ahead of the Fourth of July holiday weekend. The rally will urge people to help keep Fallbrook safe by avoiding driving under the influence of alcohol or drugs, calling 911 to report suspected DUI drivers, and supporting efforts to enforce DUI laws.

FALLBROOK – Some local students plan to hold a pre-Fourth of July rally to remind area residents that it is dangerous and illegal to drive under the influence of alcohol, marijuana, or other impairing substances.

Members of the Fallbrook Youth Advocacy Coalition met last week to paint eye-catching signs and banners for the rally, set for July 2 at the intersection of South Mission Road and West Clemmens Lane in Fallbrook.

The coalition is comprised of 27 middle and high school students aged 12 to 18. The group planned the rally after a June 4 crash that saw a suspected drunk driver going...