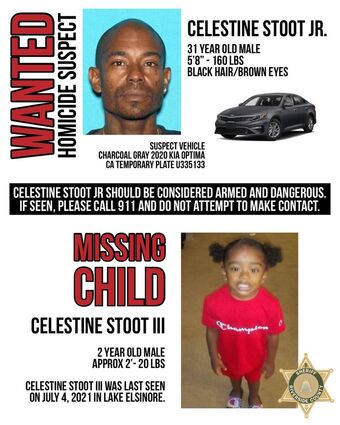 LAKE ELSINORE - An Amber Alert was issued today in connection with the abduction of a 2-year-old boy in Lake Elsinore, allegedly by his father.

Celestine Stoot Jr. was last seen in Lake Elsinore on Sunday, according to the alert, issued by the California Highway Patrol on behalf of the Riverside County Sheriff's Department.

Stoot should be considered armed and dangerous, according to the alert. Anyone with information on his whereabouts was asked to call 911.