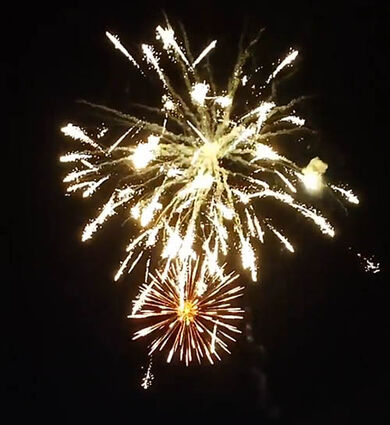 Sunday, a year after the coronavirus pandemic nixed most Fourth of July bashes.

of the 20-minute fireworks show, which will be telecast live on Fox5 San Diego and affiliates in Los Angeles, San Francisco, Sacramento, Fresno and

Bakersfield. A musical simulcast will be broadcast live on KGB 101.5 FM radio.

Fireworks will be discharged from four barges placed strategically around San Diego Bay. Barge locations will be off the shorelines of Shelter

``We are excited for the return of the Big Bay Boom,'' said Michael Zucchet, chairman of the Board of Port Commissioners. ``Not only is this event

incredible to see and to celebrate our nation's independence, it has a major economic impact on the port and the region, and that will be especially

important this year as we emerge from a very tough period.''

``The Big Bay Boom this year will be our 20th and we hope it welcomes everyone back from a year under COVID,'' said Sandy Purdon, executive producer of the event. ``Besides being one of the largest July 4 fireworks shows in America, it supports the Armed Services YMCA and our military families in San Diego.''

The Big Bay Boom can be viewed from Shelter Island, Harbor Island, Spanish Landing, North Embarcadero, South Embarcadero, Cesar E. Chavez Park, and Coronado Tidelands Park. Parking areas fill up early and the Port of San Diego strongly encourages the use of public transportation or rideshare. The Metropolitan Transit System will be providing expanded train, trolley, and bus service and is offering ``Friends Ride Free'' -- where a friend may ride free with a fare-paying customer on all MTS routes on July 4.

Due to the large volume of visitors to Harbor Island and Shelter Island, the access roads to these parks may be closed to entering vehicles at

some point during the day. Pedestrian access will remain available. As part of efforts to ensure a safe and accessible waterfront, there will be zero

tolerance for illegal parking. Double parking, parking in a red zone, and parking against posted signs will result in citations and/or towing.

miles and bike rides are 12, 28, and 50 miles. Participants can run or ride anywhere they like: a road, trail, treadmill, gym or track -- or the

traditional route on the paved path around Lake Miramar; logging their miles until July 5. Proceeds go to fund scholarships for outstanding local graduating seniors. For more, go to https://runride.org.

-- Coronado: The Crown City Classic road race will hold its 48th annual race. Some 2,000-plus participants are expected to participate. The

Coronado Tidelands Park, 2000 Mullinex Drive; The Coronado Swim Association will host the 68th 4th of July Rough Water Swim following a virtual swim last year. Coronado Central Beach; Coronado will host its annual Independence Day Parade on Orange Avenue from First Street to Churchill Place and Ocean Boulevard from 10 a.m. to noon. Livestreamed at tv.coronado.ca.us; There will be a concert at the Ferry Landing from 2 p.m. to 5 p.m.

-- National City: National City will host a free half-day camp with fun and games for youths. The Community Services Department will lead games at

Kimball Park for the kids during the camp. The day camp is made possible by a donation from EDCO. The camp will take place at Kimball Park from 9:30 a.m. to 1:30 p.m. for ages 6-12. Children can expect a day of potato sack races, water balloon fights, and lunch, snacks and water will be provided. This camp is only open to National City residents and space is limited. http://www.joinnatcity.com.

-- Valley Center: Valley Center's Western Days Country Fair and Parade is from 10 to 11:30 a.m. from Cole Grade Road to Lilac Road, with roads

-- Rancho Bernardo: The RB Community Council and the RB Recreation Advisory Board will host an ``Old Fashioned 4th of July'' at the RB Community

-- Oceanside: The Oceanside Parks and Recreation Department will host a celebration of the city's 133rd anniversary, including food booths and live

musical performances, and fireworks display at 9 p.m. The recommended viewing area is Rancho Del Oro Drive, which will be closed beginning at 5 p.m. from Oceanside Boulevard north to Mesa Drive. No alcohol or dogs are permitted at this free, family-friendly event. There will be a fireworks show at Grace Church, 1602 S. El Camino Real, from 7 p.m. to 10 p.m. Parking is limited.

-- Coronado: Art in the Park will run at Spreckels Park, Sixth Street, and Orange Avenue from 9 a.m. to 4 p.m. There will be a Navy Leap Frogs

Demonstration from 2 p.m. to 3 p.m. at the golf course near Glorietta Bay.

Fireworks will be held at 9 p.m. over Glorietta Bay, near Stingray Point. Fireworks over San Diego Bay can be viewed at the Ferry Landing.

-- San Marcos: The Fourth of July at Lake San Marcos will run through 5:30 p.m. starting with an Honor Guard, posting of the colors and recognition

of veterans. San Marcos Mayor Rebecca Jones and others will speak at 11 a.m. The event will include a patriotic dog contest, food, kids' games, along with a patriotic boat parade at 4:30 p.m. on the lake; fireworks will begin at 9 p.m. at Bradley Park, 1587 Linda Vista Drive.

-- Poway: The city will begin its Old Fashioned Fourth of July Celebration, which will continue through 4 p.m. at Old Poway Park, 14134

shuttles to and from the event will be available from two locations. Two Independence Day fireworks displays will run simultaneously starting at 9 p.m.

-- Julian: Julian will hold a parade from noon to 1 p.m. on Main Street. There will be two flyovers by vintage aircraft starting at 10 a.m. along with musical entertainment, including bands from local schools, Gold Drum and Bugle Corps, and Mariachi Continental de San Diego.

-- Oceanside: The Yankee Doodle Dinghy Parade will begin at 1 p.m. at Oceanside Harbor at the Oceanside Yacht Club and continues on to the south end of the harbor.

presented by the Ramona Kiwanis, Ramona Rotary, and Ramona Chamber of Commerce. This event will once again be held on the backfield behind Olive Pierce Middle School, 1521 Hanson Lane. Fireworks start at 9 p.m and will be set to music from Star 94.1FM/iHeartRadio.

-- Carlsbad: Legoland California will host a Fourth of July celebration, ``Red, White, and Boom!'' included in the cost of regular park

admission. Throughout the day, kids can participate in family picnic games and building activities. The evening fireworks show will combine patriotic music with pyrotechnics, One Legoland Drive. Park Hyatt Aviara will host a firework show as part of its ``Light up your Fourth of July'' weekend festivities. The fireworks can also be seen from surrounding areas, 7100 Aviara Resort Drive.

and entertainment. San Diego-based rock band DecaDames will perform starting at 7:35 p.m., before the fireworks, then will return to the stage for a second set. For more, go to cityofvista.com/july4.

-- Escondido: A fireworks show will be held at 9 p.m. at Grape Day Park, 321 N. Broadway, and can be seen from central Escondido.