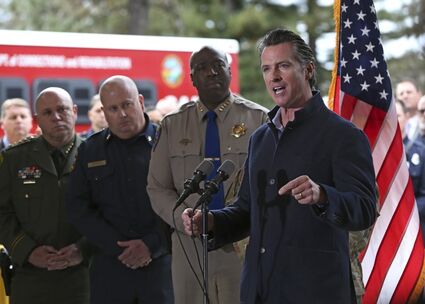 In this Jan. 8, 2019, file photo Gov. Gavin Newsom discusses emergency preparedness during a visit to the California Department of Forestry and Fire Protection Cal Fire Colfax Station in Colfax, California. On his first full day as governor, Newsom announced executive actions to improve the state's response to wildfires and other emergencies. Newsom has vastly overstated wildfire prevention work done under his administration according to an investigation by Capital Public Radio, published June 23, 2021.

State fire officials have treated less than 18 of the 140 square miles (50 of the 365 square kilometers) that the Democratic governor has touted, the radio station reported. The land is part of 35 priority projects Newsom designated in 2019 on the heels of the deadliest wildfire season in state history.

In 2020, California's fuel reduction efforts also dropped from the year before, and Newsom cut the fire preventio...