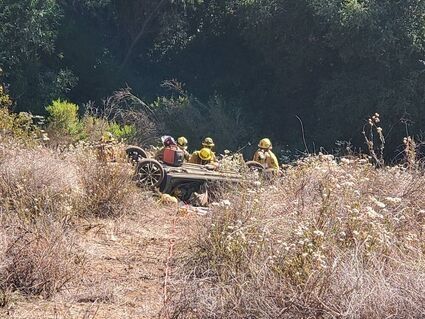 The first crash occurred last weekend in Fallbrook, claiming the lives of Andrew Caldera of Escondido and Noah Granado of Temecula, both 21,

according to the county Medical Examiner's Office.

Early Saturday morning, the two friends dropped off a woman in Murrieta, then headed south into the San Diego area in a Toyota sedan driven by

The next day, unable to contact Caldera and Granado, friends and relatives of theirs set out to search for them, finding Caldera's car shortly

before 4:30 p.m. Sunday at the bottom of a steep embankment alongside southbound Interstate 15, about a half-mile north of Pala Mesa Resort.

Emergency crews made their way to the upside-down vehicle and found the men's bodies inside. It was unclear exactly when the crash occurred.

The second of the two deadly traffic accidents took place shortly after 10 a.m. Thursday, when Christian Cibrian of San Marcos lost control of

his car while headed west on Elfin Forest Road, west of Harmony Grove Road in Elfin Forest, according to coroner's officials.

The vehicle struck a tree, then went down a roadside embankment. Cibrian, 36, died at the scene of the crash.