VISTA - A 27-year-old woman who allegedly drove while under the influence and crashed her car off Interstate 15 in Bonsall, killing her 5-year-old daughter and critically injuring her two toddlers, pleaded not guilty today to charges that include murder.

Kapri Raven Coleman is accused in last Wednesday's crash, in which the California Highway Patrol said her 2009 Hyundai Genesis veered off the

The sedan overturned and tumbled down an embankment, ejecting two of Coleman's daughters, ages 5 and 3. The older girl died at the scene.

Paramedics airlifted the surviving girl and her 1-year-old brother to Rady Children's Hospital in San Diego, where they were admitted in critical

Coleman was also hospitalized, then booked into county jail the following day.

Prosecutors say preliminary results from the hospital indicate she had a .16% blood-alcohol content -- twice the legal driving limit in California

-- and tested positive for other drugs in her system. Coleman remains in custody without bail.

A 5-year-old child was killed and two children suffered critical injuries on July 14, 2021 at 2:25 am, when a solo vehicle traffic collision occurred on I-15 northbound, north of Gopher Canyon Road when the car driven by a 27-year-old woman crashed down a 150 ft. embankment.

For reasons that are still under investigation, dispatchers received a call that the driver veered her vehicle to the right, traveled off the roadway down a 150 ft. embankment and overturned, according to North County Fire Protection District PIO John Choi. The woman is expected to be booked on suspicion of felony DUI upon her release from medical care.

The CHP reported that the vehicle ended up flipped over 150 feet down the hillside. The 5-year-old and the 3-year-old girls were ejected during the crash and didn't appear to be in car seats, according to PIO Choi. The 1-year-old boy was restrained in a car seat and remained in the cabin. The relationship between the children and the 27-year-old female who was driving the 2009 Hyundai Genesis wasn't clear, according to PIO Choi. There was also a dog in the car with the children when the vehicle crashed. 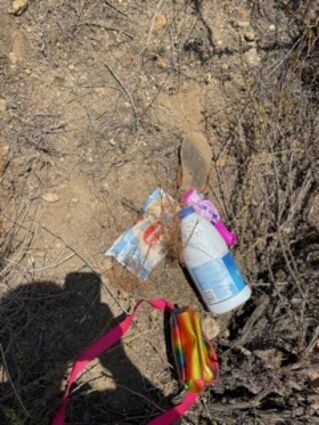 A little girl's purse, shoes, clothes and items are still strewn across the embankment with pieces of wreckage.

The oldest child and the dog were pronounced dead at the scene, while the other two children were flown to Rady's with life-threatening injuries.

A SigAlert was issued at about 3:05 a.m. shutting down the right two lanes on northbound Interstate 15 north of Gopher Canyon Road. The #3 and #4 lanes were affected from the time of the collision until approximately 8:00 a.m.

The 27-year-old female driver of the Hyundai has been identified as Kapri Raven Coleman. Coleman has been booked into Las Colinas Detention Facility and is facing multiple felony charges related to this incident. Any additional questions please contact Officer Juan Escobar.

This incident remains under investigation. Anyone with information is asked to contact the CHP Oceanside office at (760) 643-3400.