Woman veers off freeway after being 'bumped' by semi-truck 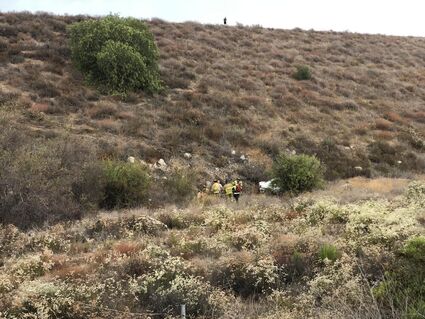 |A semi-truck driver stands on the freeway shoulder above and firefighters tend to the woman who veered down the steep embankment..

At 5:38 pm tonight, a car reportedly veered off the southbound I-15 freeway after being "bumped" by a semi-truck, just south of SR 76.

A woman, who was driving the car, was able to drive down the steep west embankment. North County Fire Protection District (NCFPD) made access and walked the patient out and transported her to Temecula Hospital with non-life-threatening injuries, according to NCFPD PIO John Choi.

Onlookers were commenting how she was able to keep control of the car and keep it from rolling over.

They exited near Dulin Rd. on the west side of the freeway.

The semi-truck driver pulled over and stayed on site to talk with agencies present.