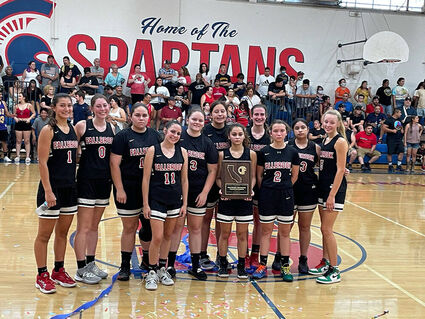 "I'm always disappointed that we don't win," Fallbrook coach Trae Harrison said of losing in the regional final. "I'm happy about having the opportunity to do it."

Seven teams competed in the Division 5-AA playoffs. St. Joseph was the top seed and received a first-round bye. Strathmore was seeded second. Capistrano Valley Christian had the fourth seed and hosted fifth-seeded Fallbrook in a June 15 first-round game.

"The girls were excited. By that time we knew that if we won that game we got the opportunity to play St. Joseph again," Harrison said.

Fallbrook defeated Capistrano Valley Christian by a 63-28 margin. "They were ready. We played well that game," Harrison said.

"Everybody contributed that game. It was a complete team win," Harrison said.

During the regular season, Fallbrook and St. Joseph played May 5 in San Marcos and the Warriors won that 57-42 game. Fallbrook returned to the Crusaders' court for the June 15 regional semifinal.

"We still didn't execute the way I would have liked us to have," Harrison said.

"Everything they did was through their bigs, so we needed to figure out a way to counter that," Harrison said. "We didn't stop them, but we definitely slowed them down."

St. Joseph held a 7-4 lead after the first period, but a 17-11 scoring advantage in the second quarter gave Fallbrook a three-point lead at halftime. The Crusaders made up that deficit, and the score was 29-29 entering the fourth period. The Warriors outscored St. Joseph by a 10-8 margin in the fourth quarter for a 39-37 victory.

"We were able to adjust and play through it this time," Harrison said.

Fallbrook was thus responsible for two of the three St. Joseph losses in the Crusaders' 23-3 season record (the other loss was to Maranatha Christian). St. Joseph was 8-0 in Citrus League competition.

The town of Strathmore is in Tulare County. Strathmore High School is in the CIF Central Section. "We had to drive to their home," Harrison said.

That trip was approximately five hours each way.

"We just had to play the game," Harrison said. "We came out flat. The team that we played, they were ready to go."

"We went in expecting just to be good and to win it without earning it," Harrison said.

"That pretty much beat us in the long run," Harrison said. "It's a lesson learned. Now we know not to take anyone for granted and to come out and play everybody the same."

"We didn't execute very well against her," Harrison said. "We didn't do anything we were supposed to do against her."

Her 42 points against Fallbrook gave Soto a season average of 30.9 points per game. "She was very good," Harrison said.

The Southern California final was the seventh game of the season in which Soto scored at least 40 points. She added nine rebounds, eight steals, and three assists.

"We didn't put much pressure on them," Harrison said.

Kurnik had 18 points but took only seven shots from the floor, making three two-point baskets and one shot from behind the three-point arc. She made nine of 11 free throw attempts. Kurnik added six rebounds. Quintana scored eight points, Blas and Ahrend contributed seven points apiece, and Nordeen provided five points along with 10 rebounds, three assists, and three steals.

The Warriors' final record was 23-9, including 10-0 in Valley League play. "Every loss this year was a learning lesson," Harrison said. "We learn from every game."

The final six of those games gave the Fallbrook players postseason experience with the final three of those providing state tournament experience. "It was a great opportunity. The girls learned a lot," Harrison said.

Fallbrook had only one senior, whose injury prevented her from being on the court during the section and regional playoffs.

"They know they have the opportunity to come back and do it again next year," Harrison said.