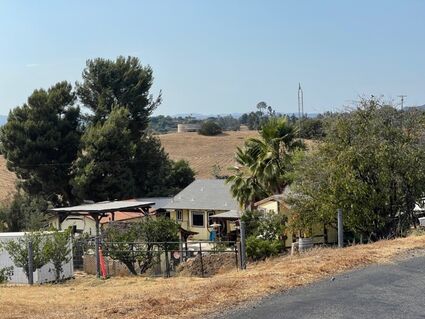 The Ridge Dr. property where homicide detectives dug up a body on July 14, 2021.

The body that was found buried on a property on Ridge Dr. in Fallbrook on July 14, 2021 has been identified by the County Medical Examiner's Office as fifty-six-year-old Robert Berry Pierce (Also known as Bobby Berry Pierce). The next of kin has been notified, according the San Diego County Sheriff's Department. It appears Pierce was from Murrieta. More will be reported as the information becomes available.

Sheriff's Homicide detectives identified twenty-nine-year-old Nicolas Burg as the suspect in the murder. Burg was arrested in Murrieta, California and booked into Vista Detention Facility for one count of 187(a) PC – Murder. Burg is a resident of Fallbrook and lives at the property where the body was found.

On July 14, 2021, Sheriff's deputies were investigating a suspicious circumstance. Deputies located a body buried on a property in the 400 block of South Ridge Drive in Fallbrook. The Sheriff's Homicide Unit responded and assumed responsibility of the investigation. The body of an adult male was exhumed and received by the Medical Examiner's Office.