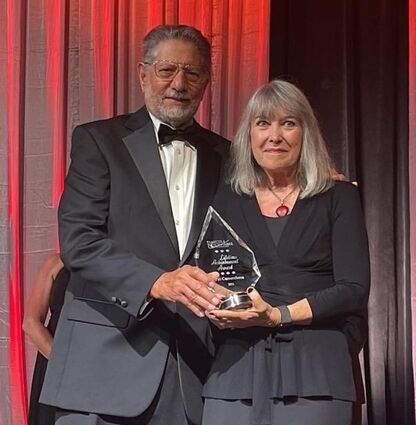 On July 24, the Temecula Valley Chamber of Commerce awarded Pat Comerchero a Lifetime Achievement Award for her leadership in building and directing Professor Pennypickle's Workshop in the heart of Old Town Temecula. This small woman with a huge heart for children and for the community conceptualized the highly imaginative museum that stretches each visitor's understanding of our universe through the sensory experiences and the hands-on exhibits.

It is truly a one-of-a-kind children's museum, and it draws visitors from great distances. Its original name, the Imagination Workshop, has been changed to Professor Pennypickle's Workshop. Upon entering the "home of Phineas T. Pennypickle," a guest encounters whimsical, larger than life scientific experiments with sights, sounds, and palpable surfaces to explore. The emporium offers tunnels to climb through and experiments to perform with experienced guides.

With a mission to help children and families to discover science through play, the

floor space is filled with steampunk funky and wonky items to manipulate and observe.

Accompanying grandparents enjoy the wonders at every turn as much as the children do. It is a mix of Alice in Wonderland with McGiver with some Albert Einstein thrown in.

It is a destination for young ones, whether for a trip with the family, a birthday party, or a scout field trip.

Comerchero's brilliant imagination brought this museum into existence from her notebook of designs. She doggedly persisted in selling the community and other investors on the concept, until it came into being. Professor Pennypickle's Workshop opened in 2004 and has captured wide acclaim. The children's museum has won several prestigious awards against such notable contenders as Disneyland Parks.

Comerchero took on adult responsibilities early in life and has a soft spot in her heart for other children who have to grow up too soon and for foster children whose lives are disrupted. She works with CASA (Court appointed Special Advocates) to provide for children who cannot live with their parents and often hires them to work at Pennypickle's Workshop.

The structure that houses Professor Pennypickle's Workshop was originally constructed in the early 1990s as an antique store with many nooks and crannies where multiple antique vendors rented spaces. After sitting empty for a couple of years, it was the logical location for the children's museum due to its square footage and location near other entertainment venues in Old Town Temecula.

The location of the workshop was the site of the Welty family home and post office in the late 1800s and early 1900s. They owned Hotel Temecula across the street for many years. Later, after the Welty home was razed, Temecula's early one-room schoolhouse was moved onto the lot from its location on Loma Linda Road. It was painted red and was known as The Old Red Schoolhouse Antiques. After it burned down in the 1980s the lot sat empty for a number of years before the current building was erected. 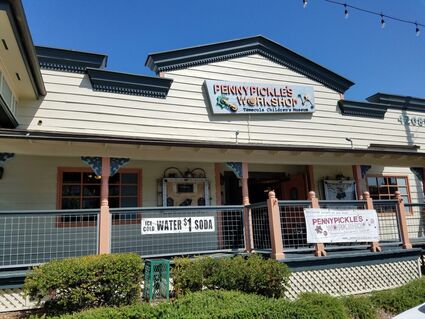 Comerchero's vivid imagination and her concern for teaching science to children in an entertaining way has given Temecula a world-class children's museum. It is an outstanding achievement worthy of the recognition given to Pat by the Temecula Valley Chamber of Commerce and of the many other regional and national awards the museum has received.

I would encourage each reader to check out Professor Pennypickles' Workshop.

Farnbach is a member of the Temecula Valley Historical Society and is an author and coauthor of several history books about the Temecula area. The books are available for purchase at the Little Temecula History Center or online from booksellers and at http://www.temeculahistoricalsociety.org.