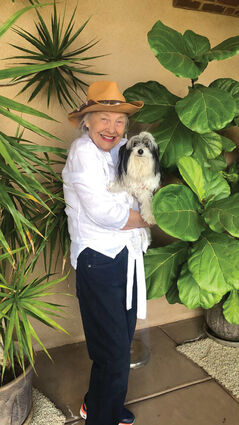 This location on Green Briar Drive handles only wholesale clients. There is also a 33-acre growing farm off Reche Road, and the retail site on 12 acres in Rainbow, across from Rainbow Oaks Restaurant.

Hulsey's husband, Joe K. Hulsey, passed on May 24, 2020, shifting her from retirement to instead handling the business with the help of manager Michael Hulsey, their oldest son.

"I was 86, but I was strong," she said about a 5-day hospital visit with COVID-19 in February. "COVID tried to kill me, but it's God who has my number," Hulsey said.

She knows her years may be numbered, but she has many plans, from a fishing trip to writing more books. Hulsey has self-published three books in recent years and also wants to spend more time with her four sons, seven grandkids, and two "greats." Her sons, Michael, Tony, Joe Jr. and Kelly, grew up working hard in the nursery business in Las Vegas.

"I love family first, but my other loves are dancing, fishing, painting, writing, and trees and flowers," Hulsey proclaimed.

"I also love Jesus," she said later. "I work for Him every day."

Born and raised in Louisiana, fishing is something she enjoyed doing with her siblings – four sisters and a brother – as well as later in life. Her father was an accomplished artist, and Hulsey has dabbled in painting – and talks about taking lessons. Dancing has always been important. She grew to love rock-n-roll when it was just starting in the 1950s. Her favorite artist was Jerry Lee Lewis.

Dancing is also special for her because it's how she met her husband.

"Joe played the drums in the Air Force Band and there was an officers' dance in Shreveport in 1952. We met on the dance floor and it was something special we shared for so many years."

Joe and Lee Hulsey were married for 67 years. He died of bone cancer with his wife and family by his side. Hulsey provided hospice care for months before his passing, she said.

Prior to moving to Fallbrook, the family lived in Las Vegas for 40 years after leaving the Air Force. Joe Hulsey worked in casino management before venturing into the nursery business. When the Las Vegas Convention Center opened in 1970, the Hulsey's were the official florists and decorating contractors for 16 years. Their business, Sunset Gardens, grew to two sites before son Michael started Roseland Nursery in Fallbrook in 1984. Joe and Lee Hulsey moved to Fallbrook in 2000.

"We love Las Vegas – we had a great home and a cabin cruiser on Lake Mead – but there's nothing like the beauty of Fallbrook," she said.

She said Roseland Nursery grew from its honesty, integrity and truth.

Of course, roses are a big part of the business, as well as many other plants, shrubs and trees. The nursery is known for its oak trees, king and queen palms, and roses. Hulsey said they have one of the largest oak tree farms on the West Coast.

"If we don't have what you're looking for, we'll get it," she likes to say.

Though COVID-19 slowed Lee's activities for several weeks this year, the business has done well during the pandemic.

"It hasn't had a negative impact," Lee said. "In fact, it's as busy as ever, and maybe even better.

"If everybody sticks together, we can change all of Fallbrook. We just need to help one another."

"It's a joy to live in Fallbrook," she added, "Fallbrook really is paradise!" 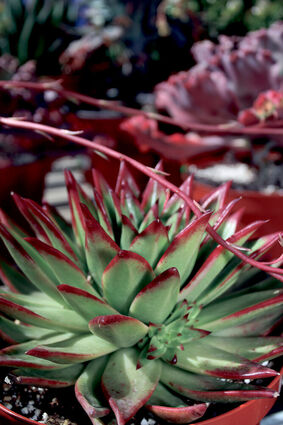 She also has an ad in Village News, "Lee's Corner," where she shares her nuggets about life.

"They come from God, usually in the middle of the night," she shared.

"My Golden Nuggets as a thought process, is a relatively short narrative with a more or less complex idea, about human beings, their feelings, thoughts, actions, etc. It is the best and worst, happiest and saddest moments of one's life to stop and think," she explained.